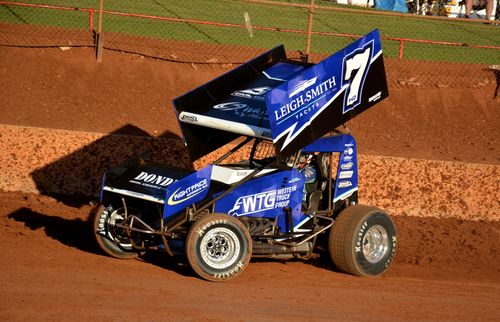 Having endured a miserable night of misfortunes in the previous round just seven days earlier, Lachlan McHugh bounced back to score an emphatic win in round four of the East Coast Logistics Sprintcar Track Championship at Archerfield Speedway on Saturday night (November 13). McHugh took control of the race early and distanced himself from his pursuers, only brought back to the pack in restart situations. Having started alongside McHugh on the outside front two and leading the opening moments before falling back to fifth at one stage, Luke Oldfield rallied to regain lost ground and fight his way back into second spot. After a big run into the top five the previous weekend, Tim Farrell delivered on the promise of that performance with a strong drive into third place ahead of young Jy Corbet, who seems destined for a podium appearance in the not-too-distant future, while Adam Butler rounded out the first five.

In the TFH Stan Burrow Midget Stampede, Jayden Peacock took maximum advantage of some good fortune to lead throughout, leading home Rusty Whittaker and Rob Stewart in the shortened 25-lap feature race. Scott Farmer finished fourth ahead of Casey O’Connell, who advanced from deep in the field after transferring from the B Main.

Of the 27 cars that hit the track for Sprintcar qualifying, those running early in the session certainly had the best of the track and Darren Jensen drew on his considerable experience to stop the clock at 12.599 and emerge with KRE Quick Time. Farrell (12.673), Kevin Titman (12.804) and Corbet (12.809) were next quickest, followed by Butler (12.889), Oldfield (12.899) and McHugh (12.934), all of whom would ultimately feature in the Pole Shootout. Woods (12.971) was the last of the sub-13 second runners, with Karl Hoffmans and Ryan Newton rounding out the top ten.

In dry, dusty conditions, the opening round of heats produced few highlights, with Mitch Gowland leading throughout from pole position to win heat one over Randy Morgan and McHugh.

Maroske downed Newton and Aaron Kelly in heat three and then backed up in heat four to win again, this time ahead of McHugh and Bonsey on a track that had been whipped back into shape during a short early interval.

Brad Ayers outpaced Oldfield and Pholi to take out heat five, with the final heat falling in favour of Kelly from Anthony Lambert and Woods.

Gowland was the early leader in the B Main, but come the fall of the chequer it would be Bryan Mann leading the field home. Vardy relegated Gowland from second, leaving Ayers to nab the final transfer position.

Maroske was the big mover in the Spanloc Pole Shootout, outgunning Corbet, Butler and Titman to take out the Bronze round before also prevailing in the Silver session ahead of Farrell, Jensen and Corbet. In the Gold shootout, Maroske had no answer to the pace of McHugh and Oldfield, who would share the front row for the feature, leaving Maroske and Farrell to launch from row two.

Whilst it was Oldfield who got the initial jump to lead the field away, McHugh quickly took control of the race and, once in front, he faced little resistance. The first restart came on lap seven when Titman slid to a halt in the main straight and subsequently retreated to the infield. Upon resumption, McHugh skipped clear again as Oldfield found himself under pressure and was rounded up by Maroske, Farrell and Jensen to be sitting fifth when the next restart came on 22 as a result of Kelly and Woods entangling in turn three, although both would continue once separated. Oldfield pounced on the restart to move ahead of Jensen, with the race halted again two laps later when Vardy rode out a heavy crash in turn one that also put Kelly out of commission. Just as Maroske looked to have second spot secured, a flat right rear tyre ended his challenge and, with Jensen also exiting due to a deflated donut, a final restart was called with two laps remaining. Despite the fact that Oldfield, having rounded up Farrell in the wake of the Vardy/Kelly imbroglio, was now back in second spot, McHugh never looked under serious threat as he completed the final laps to secure his first Archerfield feature race success for the season. A race-long battle between Corbet and Butler proved one of the few highlights in a race that failed to reach the heights of previous rounds, with a barnstorming run from Ayers carrying him from 18th to sixth. Another B main transferee in Gowland was next in line, with Hoffmans, Woods and Mann rounding out the top ten. With a flat tyre also putting Mark Pholi on the grass, Randy Morgan, Ryan Newton and Andrew Baumber were the only others to go the distance.

The first of the TFH Midget heats went to Nathan Mathers in advance of Whittaker and Kendall, both of whom advanced from the third row.

Despite track conditions that were not compatible with his hard charging style, Charlie Brown still proved too quick in heat two after starting sixth, leading home Barry Gibbs and Casey O’Connell.

Brown doubled up to win again in heat five over Stewart and Gibbs before Clauss clinched the final heat in his first meeting for this season, followed home by Peacock and Mathers.

Brad Dawson made easy work of the B Main, leading home Jesse Harris, Bernie Clarke and the final feature race transferee in Casey O’Connell, leaving Kody Stothard, Drew Fenton, Connor McCullough, Glen Prowse and Gavin McDowell to join Darren Vine, who had failed to fire a shot in the heats, on the sidelines for the main event.

Unfortunately for Brown as top qualifier, an 8-car inversion of the feature race grid would see him starting from the outside of row four in the Stan Burrow Stampede, alongside his opening round nemesis in Kendall, with Peacock gifted a pole start alongside Doyle. Taking maximum advantage of his good fortune, Peacock led the field away and would hold sway at the front as the rest of the field battled each other. As expected, Brown headed to the top in search of some drive in the shadows of the wall and, when Doyle and Hefford clashed on lap nine to trigger a restart, he had gained two spots. Peacock maintained his lead ahead of Stewart, Whittaker and Kendall, with Brown abandoning his chase a few laps later, slowing through turn one to head infield, a subsequent skirmish between Dawson and Gibbs halting proceedings again. Just two laps later, racing was delayed once more when Kendall, having already disposed of Whittaker for third, looked to squeeze underneath Stewart through turn two, only for the resultant contact to leave Kendall immobile and forced to the back of the bus for the restart. When Gibbs flipped out through turn one to halt proceedings once again, officials vented their frustration by reducing the race distance, leaving Peacock to see out the final five laps to secure the win. Whittaker slipped underneath Stewart to snatch second spot with just over a lap remaining, with Scott Farmer having to settle for fourth despite his efforts in sweeping all of the track in search of a sweet spot. O’Connell obviously found the conditions to his liking, surging from position 20 to be fifth at the flag, followed by Mathers, Mitchell Rooke and Kendall, with Bernie Clarke, Jesse Harris, and Whatmore the only other survivors.

Liam Williams downed Kaydon Iverson and Kurt Wilson to win the first of the Formula 500 heats, with Tom Partington outpacing James Kennedy and Brady Argles to take the other.

It was all Queensland champ Kennedy in the feature race though, leading throughout and clocking the fastest lap of the race to finish two seconds clear of Iverson, with Wilson home third ahead of Williams and Argles. Next in line were Partington and Mitch Whittaker, with a trio of recent Junior graduates in Kinser Claridge, Jared Boyes and Kacy-Lee Black rounding out the top ten.

Following heat wins to Darren Baldwin and Tyler Stralow, it was Andrew Kimm who continued his strong early season form in the Lightning Sprint feature race, relegating Stralow and Baldwin to second and third respectively. Wayne Jukes and Scott Genrich finalised the top five, while the only other finishers in the small field were Jason Rae, Scott Jukes and Jim Gollagher.

Ricky Price and Aaron Stone shared the spoils in the combined Limited Sedan/Open B Sedan heat races, but the feature race resulted in success for Daniel Taylor over Stone, Tim Swart, Shaun Donnelly and Mark Anderson.

Declan Brownsey blitzed the field in both Legend Car heats and then started the feature from the back of the field, making his way into second place with little resistance but unable to chase down Matt Gordon. Tim Maguire was more than seven seconds adrift in third spot, while Colin Crepin and Luke Day were the only others to take the chequer.

The next meeting at Archerfield Speedway is on Saturday, November 27 featuring a huge program that will include round five of the East Coast Logistics Sprintcar Track Championship and Dirt Modifieds, along with Wingless Sprints, AMCA Nationals, Formula 500s, Open A/Outlaw Sedans and Formula 500 Juniors.