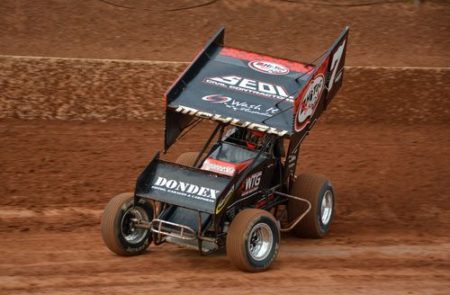 Continuing his remarkable run of success, Lachlan McHugh scored his fifth feature race win of the year at Archerfield Speedway when he powered to victory in round four of the East Coast Logistics Sprintcar Track Championship on Saturday night (December 19). McHugh served up what was perhaps his best performance of the season, demonstrating patience and precision in his surge to the front as he chased down Luke Oldfield, Callum Walker and early leader Cody Maroske before taking control of the race. Oldfield was brilliant on the highline and never moved from his position on the top of the track, a tactic that has served him so well in the past and again carried him onto the podium, albeit with yet another runner-up trophy. Following the Oldfield playbook, Walker shifted up-track late in the race and would find himself in third spot at the conclusion of 30 laps, leaving Maroske to rue the missed opportunity after starting from pole position.

The finale of the Inksane Queensland Midget Championship also served up plenty of memorable moments before Reid Mackay emerged the victor, having taken over the lead in the aftermath of a clash between Kaidon Brown and Matt Jackson that put both out of contention. In finishing second, Darren Vine continued his run as the only driver to appear on the podium in every Archerfield Midget event so far this season, while Cal Whatmore snared third spot ahead of Chris Singleton, with Charlie Brown surging from the back of the field (twice) to finish fifth.

A couple of late scratchings left 27 cars to hit the track for Sprintcar qualifying, with McHugh serving early notice of his intentions with a fastest lap of 11.728, the only driver to clock under 12 seconds. Mitchell Gee (12.017), Aaron Kelly (12.042), Walker (12.072) and Dylan Menz (12.098) were next quickest ahead of Kevin Titman, Allan Woods, Jock Goodyer, Randy Morgan and Maroske.

Back on track after a wild wipeout at the previous round, Darren Jensen bounced back in the best possible way, taking out the opening heat ahead of Adam Butler and Oldfield.

With a fastest-from-the-front format instituted for the second round of preliminaries, Maroske downed Oldfield and Butler in heat four, with McHugh romping home from pole position in heat five to finish more than five seconds clear of Kelly and Woods.

The opening laps of the final heat saw Walker and Gee, who had flipped out of his opening heat, involved in a great scrap for the lead until proceedings were halted courtesy of a spin from Goodyer, who was running third at the time. From the restart, Walker was able to take control to lead Gee and Farrell to the chequer.

With Morgan, Nicholas Whell and Kristy Bonsey having the top three spots wrapped up, interest in the B Main was firmly focussed on the fight for the final transfer spot into the feature as Corbet clung to fourth under pressure from Mark Pholi. However, as they exited the final turn, Pholi pounced to sneak ahead in the sprint to the chequer, leaving Corbet a spectator for the main event.

With McHugh selecting six in the pre-race grid inversion for the Dash, he would start alongside Oldfield on the third row with Maroske and Kelly elevated to the front row. Despite their best efforts, Oldfield and McHugh could do no better than second and third respectively as Maroske took maximum advantage of his good fortune. Kelly, Walker, Farrell and Murray completed the finishers with Adam Butler retreating to the infield on lap four.

The first attempt to get the feature underway only made it as far as turn two before Brent Kratzmann found himself upside down. From the restart, Maroske jumped into the lead ahead of Oldfield and Walker, whose excellent start would be a sign of things to come as he became embroiled in a see-sawing battle with Oldfield that would see the pair swap spots on more than one occasion. Sure enough, McHugh was soon in the mix and some great racing ensued as Oldfield maintained his position against the fence, leaving plenty of room for his rivals to duke it out. Having seen off Walker, McHugh set his sights on Oldfield and would slip into second spot on lap 16 before rounding up Maroske two laps later. In a drive devoid of the kamikaze passes and wild moments that often pockmark even his best performances, McHugh was clinical in despatching his rivals to eventually finish more than three seconds clear and maintain his remarkable run of results. With Maroske glued to the pole line and refusing to explore any other options, he soon found himself rounded up by both Oldfield and Walker, who would share the podium with McHugh for the second time in as many rounds. In his first outing for the season, Goodyer looked a little rusty in the heats but finished the night strongly, advancing from position ten to finish fifth ahead of Kelly, Farrell and Gee, with Titman and Woods rounding out the top ten.

Despite starting from the outside of row four, Kaidon Brown was untroubled in winning the first of the Midget heats, romping home by a sizeable margin as Bodie Smith and Zac McDonald filled the minor placings.

Heat two saw Brad Dawson hold firm at the front to defeat Matt Jackson and Matt O’Neill, with Darren Vine downing Reid Mackay and Darren Dillon in heat three after Sean Dyson threw away what looked a likely win when he tipped over in turn four.

A front row start gifted Brown another win in heat four, this time over Scott Doyle and Dawson.

Jackson downed Reid Mackay and Jordan Mackay in heat five, the latter only securing his position in the wake of a moment late in the race that saw Vine tapped into a spin by O’Neill in turn three.

The final heat proved problematic when the cars of Darren Dillon and Rusty Whittaker became entangled in turn two on the opening lap. Glen Arnold then looked to have the race in his keeping, only to spin himself out the lead with three laps remaining, enabling Cal Whatmore to grab a win over Chris Singleton and Nathan Mathers.

Having endured a miserable night thus far, Whittaker looked to have the B Main safely wrapped up, only to somehow find himself upside down in turn two on lap seven while enjoying a substantial lead. Having also endured a horror night to this point, Charlie Brown would inherit the lead and the race, taking Brodie Tulloch, Andy Hassan and Nick McDowell into the feature race with him.

Despite a distinct lack of racing for the NSW-based Kaidon Brown and Jackson, these two proved far too quick for the locals and quickly distanced themselves from the field. A moment exiting turn four on lap 12 saw Arnold slip to third momentarily and allowed Brown to skip clear out front before a restart was called on lap 15 when Charlie Brown, who had climbed into the top ten from 16th, found himself stranded on the edge of the track in the back straight. As the laps wound down, Brown found himself under increasing pressure from Jackson and it was exiting turn two on lap 28 when the latter launched his bid for the lead. Jackson got a great run out of turn two and drew alongside Brown along the back straight. However, Brown refused to yield and his efforts to block the pass resulted in contact between the two cars that left Brown in a spin and Jackson on the infield. With just two laps remaining, Mackay now found himself in the lead and was able to keep Vine at bay to score his first state championship win. Whatmore finished a couple of seconds further back in third ahead of Chris Singleton, with the other Brown surging through the field again to finish fifth ahead of Dawson and Cody O’Connell, who made a good fist of his Midget debut. Nathan Mathers, Kaidon Brown and Brodie Tulloch completed the top ten, with Dyson and Jordan Mackay the only others to go the distance.

Following heat wins to Liam Atkinson, Michael Reid, Robert Mazzer and Lachlan Robertson, it would be the latter who would go on take out the feature race. In a somewhat pedestrian single-file affair, the first five would finish as they started with Robertson leading home Atkinson, Mazzer, Jacob Jolley and Paul Robinson. Queensland champ Casey O’Connell was the only driver to make any real progress through the field, climbing from 12th to finish sixth, leaving Seiton Young, Ben Manson, an out-of-sorts David Eggins and Jayden O’Toole as the best of the rest.

Just four cars made it to the finish of the Microsorint feature with Ben Le Pla prevailing over Kaitlyn Field and Matt King, while Dave Tookey proved too strong in the Ford vs Holden vs Sigma feature, leading Mickey Mitchell and Kim Dack to the flag.

The next event at Archerfield Speedway is on Boxing Night (December 26) featuring round five of the East Coast Logistics Sprintcar Track Championship, along with Monster Trucks, Fireworks, Midgets, Modlites and Lightning Sprints.