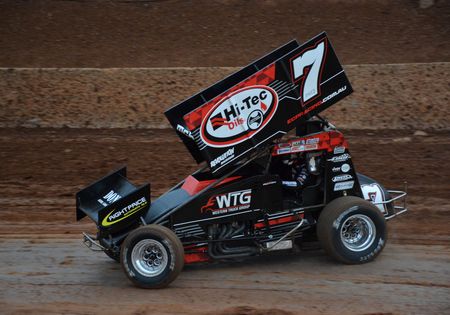 Lachlan McHugh returned to victory lane at Archerfield Speedway on Saturday night (February 13), racing from pole position to win in round eight of the East Coast Logistics Sprintcar Track Championship. On a night that served up fabulous racing across all race categories, McHugh saw off challenges from Luke Oldfield initially and then Jock Goodyer in the latter stages of the 30-lap feature race to secure his ninth such success at Archerfield so far this season. On the back of his feature race win the previous weekend, Goodyer was sensational around the top of the track in his charge into second, while OIdfield fell as far back as fifth at one stage before scrambling in the final moments to fight his way back on to the podium.

In round seven of the TFH Midget Series, Michael Kendall proved too potent aboard the Ian Boettcher Race Parts #35, surging into the lead early and never surrendering his advantage. Kaidon Brown finished in second spot, with Nathan Mathers impressive in seeing off various challengers over the course of 25 laps to secure third place.

Sprintcar time trials saw the 32-car field split into three qualifying groups, with the fastest from each group scoring maximum points. McHugh was quickest in the first group and, with a best lap of 12.419, he would emerge best overall to earn KRE Quick Time. Interestingly, another five drivers in the first group (Adam Butler, Cody Maroske, Ryan McNamara and Dave Fanning) lapped quicker than the best efforts from group two yet scored fewer points for their efforts. Jackson Delamont (12.769) and Oldfield (12.782) were the quickest in the second group, while Goodyer (12.861) and Jesse Attard (12.903) topped the timesheets in group three.

The opening heat race saw Kevin Titman launch from the second row to lead the opening lap and the nine others that followed. Andrew Corbet finished in second spot, with McHugh rounding up Nicholas Whell on the final lap to grab third.

While pole starter Peter Campbell got the best of the start in heat two, he soon found himself swamped by the field as the race played out. Having taken over the lead on lap two, Aaron Kelly maintained his position to the finish, despite the best efforts of Oldfield in advancing from the third row to finish second ahead of Darren Jensen.

With the top qualifiers handed front row starts in the final round of heats, there were no surprises in the results as McHugh, Goodyer and Oldfield all recorded wins, the latter snaring his first heat race success of the year. A runner-up finish for Titman behind McHugh was enough to elevate him into the top six overall, while others to finish inside the top three included Delamont, Randy Morgan, Butler, Attard and Woods in what were three straightforward races.

The B Main was a frantic affair that saw its first interruption on lap two with Whell, Andrew Baumber and Libby Ellis strewn through turn four, although all three would continue. Just a lap into the resumption and Zac Howell somehow found himself into the inside wall in turn four to halt proceedings again. Occupying the lead and seemingly having cast aside the miserable night he endured in the previous round, Ryan McNamara threw it away with a spin in turn two on lap six, handing the lead and the race to Walker. Second home was Dave Fanning ahead of Brad Ayers, who put in a big run from deep in the field, with Brent Kratzmann securing the final transfer spot into the feature.

At the drop of the green to get the feature race underway, there was, in the wake of their clash at the previous round, a collective sigh of relief as McHugh and Oldfield made it safely through turns one and two. It was McHugh who edged ahead and would be recorded as the leader on every lap, although there were times where he did lose the lead for the briefest of moments. When the first interruption came on lap 15 courtesy of Butler stopping in turn two, McHugh was still in command ahead of Oldfield, Goodyer and Titman, who had moved ahead of the NSW-based duo of Attard and Delamont. The race was halted again four laps later when Walker spun in turn three and it was immediately upon resumption that Goodyer pounced to relegate Oldfield. On two occasions, Goodyer dive-bombed McHugh with slide jobs through turns one and two, the second of which looked as though it had stuck, only for Brad Hilder to spin in turn two and trigger a final restart before the lap was done, putting McHugh back in front. From here, McHugh held firm and although Goodyer, who ran the ragged edge on the top of the track, fell less than a second short of securing back-to-back wins, he maintained his perfect record of top-five results at Archerfield this season. Having found himself fifth soon after the final restart, Oldfield rallied over the final two laps to reclaim third for his eighth podium finish for the season. With Titman falling through the field, Attard would find himself fourth at the flag, followed by Kelly, Maroske, Delamont and Randy Morgan. Rounding out the top ten were Mitchell Gee and Titman, followed by Woods, Jensen, Kratzmann, Ayres, Butler and Walker, whose result was a far cry from his feature win just a few weeks earlier.

The opening Midget heat race saw Lachlan Paulger power into the lead and make an early break from the pack. Paulger looked a likely winner until a spin from Barry Gibbes with two laps remaining triggered a restart that enabled both Darren Vine and Nathan Mathers to move ahead, leaving Paulger third at the flag.

Heat two followed an almost identical trajectory with Mitchell Rooke looking on track to score his first heat win, only for a spin from Matt O’Neill to bunch the field for a two-lap dash to the chequer. Having advanced to second from the outside of row four, Kaidon Brown pounced to snatch the lead on the final lap and deny Rooke, with Cal Whatmore third as a skirmish in the final corner claimed Charlie Brown, Bodie Smith and Casey O’Connell.

Paulger and Rooke shared the front row for heat three but Mathers quickly scuppered their victory aspirations when he surged to the front and held sway for the duration. When Gibbes and Kody Stothard tangled in turn one, Mathers was also faced with a two-lap dash but was ultimately awarded the race when Vine drove over Kendall in turn four to leave both cars immobile and elevate Brad Dawson into third behind Singleton.

The biggest moment of the night came in the final heat when Dean Meadows rode out a series of somersaults along the back straight. Jordan Mackay skipped clear of the field through the early going before Charlie Brown chased him down to snatch the lead with four laps remaining. Reid Mackay finished third in what was an otherwise subdued night for the Queensland champion.

Mathers started the feature from pole position but found himself relegated immediately as Vine, Kendall and Kaidon Brown advanced. Kendall quickly moved to the front and never really found himself under sustained pressure for the remainder of the 25 laps. In fact, the biggest threat to his success came following a spin from Dawson on lap two. For reasons unknown, Kendall copped a serve from Vine as the field awaited the restart, a clash that could have easily left one or both cars damaged. Shrugging off the incident, Kendall led away as Kaidon Brown closed in on Vine, the positional change coming on lap four. Another restart ensued on lap eleven when Charlie Brown, who had served up another of his spectacular highline charges, rode the ragged edge once too often and tipped over in turn three. Kendall remained in control through to the chequer, despite a final restart on lap 16 when Vine spun himself out of third spot in turn four, elevating Mathers onto the podium. Chris Singleton finished fourth ahead of Casey O’Connell, Paulger, Rooke and Brendan Palmer. Rounding out the top ten were Rob Stewart and Reid Mackay, with Vine unable to advance any higher than 11th.

Wingless Sprint heat wins were shared around between Ben Manson, Jayden O’Toole, Paul Newcombe and Mark Blyton and it was the latter proved too strong in the feature. The Dubbo-based Blyton qualified on pole position and led every lap of the 20-lap feature race. The opening lap saw Mazzer move ahead of O’Toole, who also dropped behind Paul Robinson for a few laps before reclaiming third to follow Blyton and Mazzer home. Robinson finished fourth, followed by Tim Harris, James Barton, Anthony Joyce, Ian Milnes, Steve Pilkington and Newcombe.

Following heat wins to Terry Leerentveld (2), Adam Bradford and Sean Rose, the Modlite feature race served up more spin than a politician’s press conference. A series of interruptions prevented the race from building any momentum as Leerentveld remained in control through the myriad restarts to finish ahead of Dan Lewis, Kyle Honour, Brock Lehfeldt and Chris Fing in a race that fell a long way short of the quality dished up in the heats. Best of the rest were Callum Beerling, Adrian Renkie, Andrew Carrick , Abi Meehan and Ben Cosgrove.

Boosted by the late inclusion of some additional nominations from south of the border, Lightning Sprints delivered their best display of the season thus far. Scott Jukes won the opening heat before Kurt Wilson claimed the next two and then looked on track to also take the feature race, only to spin from the lead through turn four on lap five. Darren Baldwin pounced to assume the lead and clinch the win over Andrew Kimm. Surging back through the field, Wilson had climbed as high as third before the chequer appeared. Jason Rae and Michael Gollogher completed the first five finishers, followed by Sean Iacono, Rob Holmes and the first of the interstaters in Danny Stone.

After a strong start that saw him establish a sizeable lead in the Microsprint feature race, a botched restart on lap eight saw Shane Munro swamped and shuffled back to fifth as Eddie Schwehla pounced to grab the win. Jacob Lynd and Ben Le Pla secured the minor placings, with Munro fourth home ahead of Jason Glynn and Kaitlyn Field.