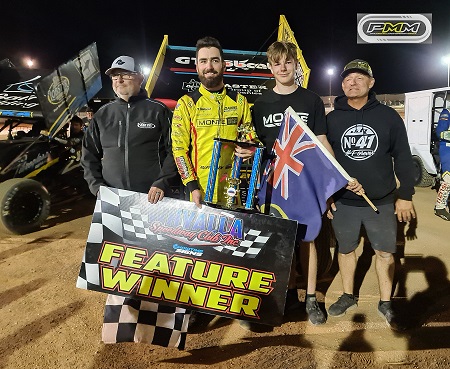 Warrnambool’s James McFadden enjoyed a perfect night at the Whyalla Speedway on Saturday as he claimed his second South Australian Sprintcar Championship along with wrapping up the 2021 Speedway Australia Sprintcar Super Series. After topping his qualifying group McFadden won both of his heat races before winning the non-stop 30 lap finale, defeating Matt Egel and Daniel Pestka.

McFadden’s victory in the South Australian Sprintcar Title extended the recent interstate dominance of the race with Brad Keller being the last local winner during the 2014/15 season.

“This place reminds me a lot of my old home track in Alice Springs. Its pretty cool to see the cars parked up against the fence and the fans just enjoying a fun night out. I really wanted to run this race. This place is giving it a real good crack trying to run good paying Sprintcar races. Even though the track took rubber you could still move around and try different lines, so the track was a lot of fun out there. I can’t wait to come back and hopefully once everything calms down it will be a full World Series show” added McFadden on the podium.

For Egel it was a case of what could have been as he charged late, but he simply ran out of laps to claim his third Whyalla feature race victory of the season.

“I just took too long to get by Daniel. That race went fast. I thought I had about 10 laps to go but I only had about five, but it took one of the best drivers and race teams in Australia to end our winning streak so second isn’t too bad. Whenever James turns up you know you are going to have a tough night” he added.

After leading the opening 14 laps Pestka would eventually finish third, a result that enabled him to finish second in the Sprintcar Super Series and first overall in the three round Sprintcars SA Country Tri-Series.

In what a great battle between four drivers it was David Murcott who round out the top four after getting the better of Jessie Attard, defending Champion Lachlan McHugh and Marcus Dumesny. Even though they were racing outside the podium places they were racing extremely hard swapping positions regularly. Dumesny would set the fastest lap of race with a lap of 12.460 to secure the 2 bonus points.

Lisa Walker, Max Vidau, Austin McDonald, Lachlan McDonough, Adrian Cottrell and Mike Fox would complete the finishers with Clinton Warner, who was running a 360ci engine, was the only non-finisher.

The opening round of heats saw the fastest drivers in qualifying start up front with McFadden and Pestka easily winning the two heats in the opening round. The second round saw an inverted six with McFadden providing the highlight of the night as he charged from position six to win, utilising the top of the track to execute some exciting passes. Austin McDonald, who was in a brand-new chassis after a crash at Murray Bridge during the SA Speedweek was extremely unlucky as McFadden made the winning pass on the final corner winning the heat by .142 of a second.

After a poor qualifying effort McHugh started from the front row in heat 4 and went on to win ahead of Jessie Attard and Adrian Cottrell.

Along with McFadden, Matt Egel also topped his flight in qualifying.