McFadden survives the McHugh challenge and a blackout

McFadden survives the McHugh challenge and a blackout

James McFadden finally added his name to the winners list of the Kings Challenge at the Borderline Speedway last night, but he didn’t have it all his own way as he had to fend off a determined defending race champion and survive a lap 10 blackout, which sent the venue into darkness after a power surge in the electrical system. 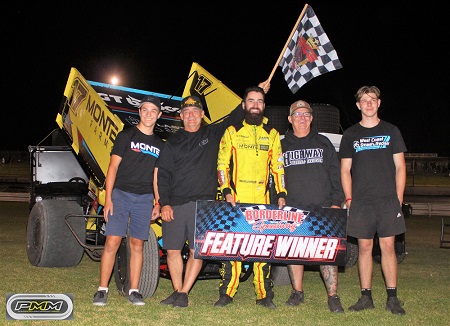 After starting from the pole McFadden lost the lead early to Lachlan McHugh and he would trail the Queenslander as the opening caution came out for Daniel Pestka, who stopped after contact in turn 1. On the restart he would fall back a further position to Jamie Veal, and they would run in this order until the track lights went out on lap 10.

In what was a surreal moment as the A-Main field completed lap 10 of the 30-lap final the track lights went out, but the drivers showed their immense skill as they all came to a halt without any major incidents. After a delay of around 20 minutes the race would continue with the final 20 laps being worth the admission price alone.

Following the delay McHugh would lead away from Veal, McFadden, David Murcott, Carson Macedo, Marcus Dumesny, impressive youngster Ryan Newton and Ryan Jones. Shortly after the restart McFadden would regain second and he set his sights after the race leader. For the next 17 laps it was simply a match race between the leaders as they ran nose to tail until McFadden seized the opportunity to take the lead with five laps remaining.

As they approached the lapped car of Joel Heinrich McHugh chose to make the pass on the South Australian on the inside of turn four while McFadden went to the top and he swept around both cars in a breath-taking manoeuvre.

From that point he led the final laps, but McHugh never gave up with both driver smoking their right rears in the final corner as they were hard on the throttle as they approached the chequered flag. Jamie Veal finished third over 4 seconds back while David Murcott and Carson Macedo completed the top 5. Marcus Dumesny, Robbie Farr, Matt Egel, Steven Lines and Ryan Jones completed the top 10. Ian Madsen, Ryan Newton, Callum Walker and Joel Heinrich completed the finishers.

In all a total of 37 cars fronted for action with the drivers being seeded in four heats. Jamie Veal, Lachlan McHugh, James McFadden and Ryan Jones topped the four qualifying groups with McHugh setting the overall quickest time of 10.914 and he was only driver to circulate in the 10 second bracket.

The night was relatively incident free other than a couple of heat racing incidents with the largest being in heat two when Tate Frost, Glen Sutherland and Kale Quinlan tangled on the back straight taking out both Frost and Sutherland.