McClue wins SXS Championship round in the capital

McClue wins SXS Championship round in the capital

Ewan McClue has pulled off an incredible victory at the second round of the 2019 DEWALT CAMS Australian SXS Championship in Canberra after winning the round’s Grand Final in dramatic fashion. 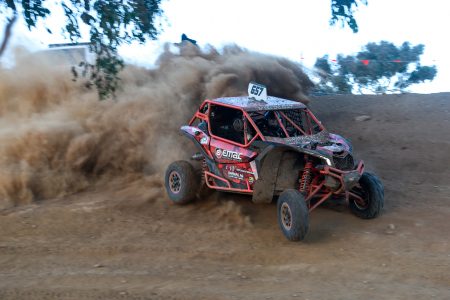 Despite picking up two race wins and two second placings throughout the round, McClue trailed another surprising leader in James Shipp for much of the round.

While McClue started the day with a race runner-up and win, Shipp got off to the perfect start with two wins, the duo marking even at the half waypoint with two wins each.

Another win over McClue to Shipp in the fourth heat saw the youngster cement top spot and solidify himself as the man to beat, while McClue ended the day with another two top three finishes.

However when it came to the most important race of the day, McClue called upon his experience in the championship to jump Shipp and pull off the win – his first since the final round of last year.

“We were really surprised with the result to be honest,” McClue said.

“We came here just to get some practice ahead of the Ballarat round and we would have been happy just to finish in the Grand Final, not be on the top step.

“We had a great time battling James and we had similar results throughout the day. It was going to be tough final, especially since it was brutal track, but it was a good weekend and I’m happy for him getting his first podium in the championship.”

With Mitch Keyte rounding out the podium, it was a far different looking top three to the previous round that featured reigning champion Simon Evans, SXS veteran Stephen Henry and SXS Sport winner Tim Liston.

Liston, who shocked the championship in Cessnock with an outright second, was unable to recreate his heroics this time – however he still managed to once again come away with the class win.

“We’re really happy to come away with to with SXS Sport win,” Liston said.

“We were the only the non-turbos in the Grand Final and it was pretty tough race, but unfortunately I got knocked out after one lap when our window closed on us and we lost steering.

“We had already won the class so we were happy to call it early. Everyone was driving at the same pace so it was difficult to pass but we still really good day.”

The DEWALT CAMS Australian SXS Championship moves down south to Monza Park in Victoria for the third round of the season on 24 August.