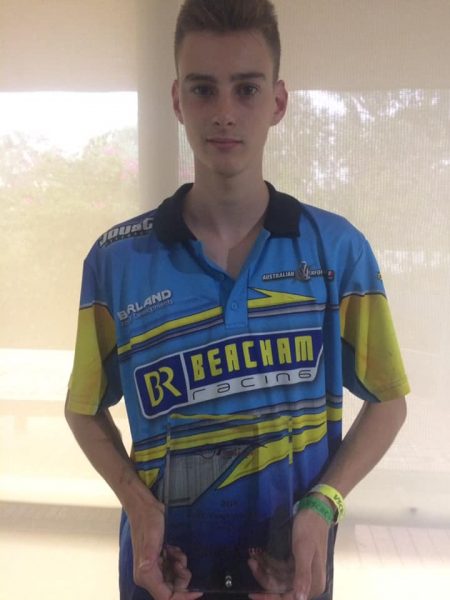 Former karting young gun Reef McCarthy has stepped up to Victorian State Series in Formula Vee taken place in the opening round of the series on the weekend gone at Sandown Raceway. With a great start to the series and consistent driving McCarthy was able to come away with some strong points and also take home the Vaughan Colenso young gun award.

Qualifying come around and after the team was able to get the car in a strong set up McCarthy was able to set times strong enough to be comfortable inside the top ten all session and pushing on the verge of breaking into the top five group. After an exciting qualifying session McCarthy was able to put himself up on the outside of the third row in position six in what was a great start for the young chargers first Formula Vee start.

Race 2 come around and after looking to make more changes to improve the car McCarthy was again away cleanly and was deep in the battle for the top five spots. In his strongest performance so far for the weekend he had made up two positions and started the final lap in fourth spot. When all seemed to be going well and on for his strongest result of the weekend another driver spun in front of McCarthy and he had to miss the car and spun himself. McCarthy was able to recover and come home inside the the top ten in position ten. McCarthy and the team were happy with the recovery but overall disappointed with the result and were out to make amends in the final race.

Race 3 and the final race and McCarthy was on the charge and looking for a fight back after the disappointment of race 2 and that the young charger did. McCarthy making moves and making progress got himself back well inside the top ten and was again on the edge of the top five looking strong. After great pace and a strong battle McCarthy was able to come home in position six in a strong finish to his weekend awarding him the Vaughan Colenso young gun award.

Team member of Reef McCarthy Racing and father Scott was over the moon for the young driver and the teams debut. “ He’s only just turned 15 and this was his first race in the car and he was up against 18 other drivers” noted Scott. “ We are very happy with how the weekend went and look forward to try and move forward throughout the season”. McCarthy will be out on track in the next round of the Formula Vee State championship in Phillip Island in the first weekend in May.