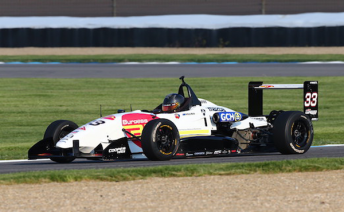 MEDIA RELEASE: Hot off the back of another podium finish just over a week ago, 20 y.o. Indiana based Aussie Anthony Martin now faces his biggest hurdle as he prepares for his first ever US oval experience in this weekends Race 9 of the 2015 Mazda ‘Road To Indy’ USF2000 Championship Series.

The 2013 WA Formula Ford Champion is making his mark in the highly regarded and fiercely contested USF2000 category. Driving for John Cummiskey Racing, Martin is fast developing his racecraft and displaying typical Aussie tenacity once the flag drops.

A little over a week ago Martin progressed from qualifying sixth to finishing fourth in Race 7 of the championship, followed by a sixth to third and onto the podium for Race 8 at the iconic Indianapolis venue. 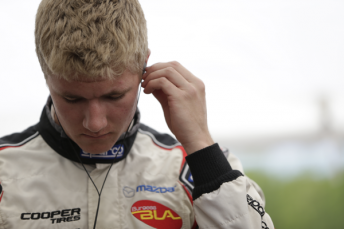 Commenting on his podium finish at the Indianapolis GP circuit and looking toward his first oval race, Martin said:

“Every time you walk into Indianapolis Motor Speedway the hairs on your arms stand up because of the history that has occurred. Then to be standing up on the podium was just an unimaginable feeling”

“The team did a great job for me, and what made it all the more special was the fact that I had my Dad, my sister Caroline and Paul Burgess from Burgess BLA, my major sponsor, all here supporting me this weekend.

“Looking ahead to next weekend, yes, I am a little anxious as it is the first oval track I will have driven on. I am quietly confident though we can do well there, and I kind of can’t wait to be able to turn left, and left only”.

Team Owner John Cummiskey, who himself has vast oval experience preparing IndyCars added: “We’ve got Anthony attending an ‘oval clinic’ on Wednesday this week where he and others will receive guidance and tutorage on the quirks of oval racing from Rick Mears and Johnny Unser.

“Whilst yes, Anthony is an oval rookie, I believe his well thought through and ‘considered’ approach to driving will serve him well’.

On the topic of his progress, Mark Larkham who mentors Martin via his Australian MotorSport Academy, and was behind his placement into USF2000, was quick to praise the young West Aussie’s continued development…

“It’s been pleasing to observe Anthony’s progress over the season to date, in particular his improvement and greater appreciation of the critical nature of his own contribution to his engineer, the the car set up, and the driver debrief part of the game.

“His general commitment to what we call the ‘application to task’ required to succeed in motorsport at a high level continues to rise, which is great.”

Both qualifying and Race 9 of the 2015 Mazda Road To Indy USF2000 Championship will be conducted this Saturday May 23.