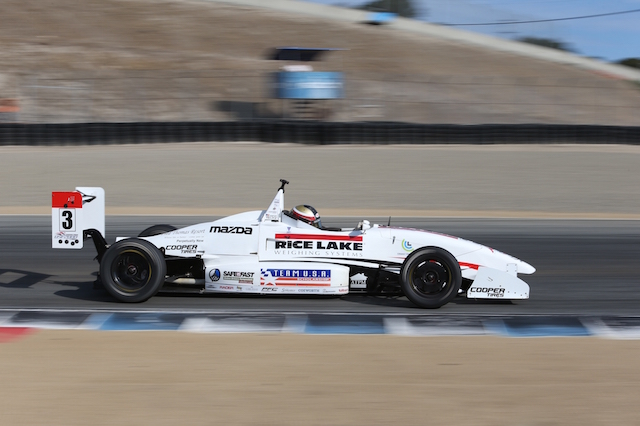 Available is the opportunity to attend an international ‘shoot-out’ to determine who wins a $US200K fully supported drive in the Cooper Tires USF2000 Championship Powered by Mazda in 2017.

Dixon, along with current IndyCar drivers Helio Castroneves, James Hinchcliffe, Tony Kanaan, Charlie Kimball and Josef Newgarden, are all graduates of series that comprises the Mazda Road to Indy – one of the most successful driver development programs in the world, providing a unique, scholarship-funded path to reach the Verizon IndyCar Series and Indianapolis 500.

Now in its sixth year, the Mazda Road to Indy offers three key steps for drivers.

Drivers begin the Mazda Road to Indy in the Cooper Tires USF2000 Championship Powered by Mazda. This entry-level single seater series is comparable to New Zealand’s Formula Ford car but with a more powerful 2.0 litre engine and front and rear wing.

From there, drivers move on to the Pro Mazda Championship Presented by Cooper Tires, formerly known as the Star Mazda Championship. Again a comparison in New Zealand would be the Toyota Racing Series but with a more powerful 260 horsepower rotary engine

The third step is the Indy Lights Presented by Cooper Tires. Indy Lights is regarded as a step below the Verizon IndyCar Series.

Scott Dixon won this series back in 2000, with Kiwi Wade Cunningham also winning in 2005.

“We’re very excited about this opportunity for Formula Ford drivers in New Zealand,” commented Steve Edwards, convener for the NZFFC.

“Single seater racing at this level is so important for young drivers looking for a motorsport career. It’s a natural progression from kartsport, and now the Mazda Road to Indy opens a door to an under 25 year old Kiwi driver to not just further their career in the States, but also give them great international exposure and a snapshot of racing in America.”

The programme is fully supported by Motorsport New Zealand.

Brian Budd (MSNZ Manager) underlines the driver development opportunity available within this programme and sees it as a way of continuing to provide NZ drivers with career opportunities that include international competition.

The six-round New Zealand Formula Ford Championship gets underway at Timaru International Raceway on 14 November with two further South Island rounds in January before heading to the North Island for three rounds.

Many drivers will first line up at the South Island Formula Ford Championship (SIFFC) which gets underway 16-17 October, also at Timaru.

Entries and car-leasing options are still available for both the NZFFC and SIFFC. With a number of drivers from Australia and the UK already entered the SIFFC expects large grids.