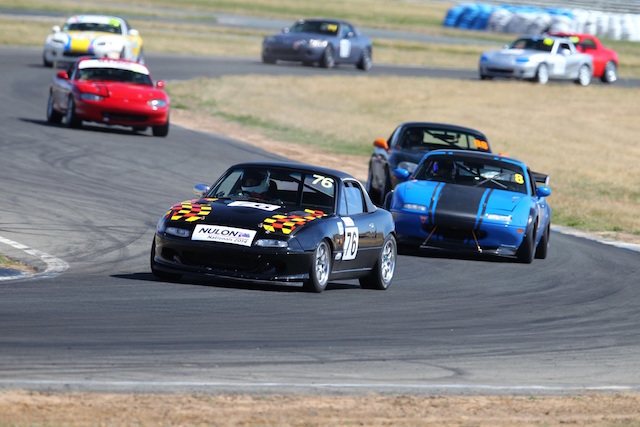 The Mazda MX5 Nationals will be held at Wakefield Park this weekend. pic: John Smith

MEDIA RELEASE: A gathering of Mazda MX5s from all over Australia will battle it out for honours in the 2015 MX5 Nationals, to be held as part of the AASA NSW State Championships at Wakefield Park this weekend, 8-9 August.

Since its launch in 1989, the Mazda MX5 has been one of the most popular sports cars all over the world, and the MX5 Nationals will be contested by 30 different cars ranging from the original, 1989 model right through to the third generation, which was released in 2005.

The MX5 Nationals will consist of two sprint races on Saturday, followed by a one-hour endurance race on Sunday morning with compulsory pit stops.

The hot favourite for outright victory will be Nick Cancian, who qualified his turbocharged MX5 on pole position at the Valvoline Wakefield 300 earlier in the year. Cancian’s main opposition will come from fast female racer Matilda Mravicic, along with the Deckspeed Racing entries of Daniel Deckers, Luke Otten and Michael Hall.

Teams are permitted to use a co-driver for the event and Wayne Cooper has taken advantage of this regulation, and signed Scott Bargwanna (cousin of Bathurst 1000 winner Jason) to share his MX5 over the weekend.

This weekend’s race meeting also features the return of the Australian Super Truck Championship to Wakefield Park, and John Bomberle is in hot form after winning the season opener at Winton last month. Steven Zammit and New Zealander John Hepburn also showed solid form, while Michael Coulter will be looking to bounce back after some mechanical problems in his Isuzu light truck.

The trucks will have a total of six races over the weekend – two Team Challenge races on Saturday, followed by four Drivers Championship races on Sunday, highlighted by the 10 lap, reverse-grid Super Prix.

The Pulsar Challenge is another category with plenty of scheduled track time this weekend, with three sprint races and a one-hour enduro. Dimitri Agathos will be the man to beat; last time Agathos raced at Wakefield Park, he smashed the lap record en route to a comprehensive round victory.

A mixture of new and old Minis will participate in the East Coast Mini Challenge, with a number of cars travelling down from Queensland to join the regulars from New South Wales and Victoria. Henry Draper returns to the driver’s seat of his car, which has been raced by Linda Devlin, and should be one of the front-runners along with John Walker and Charlie Borg.

The Alfa Romeo Series returns to Wakefield Park, featuring a large assortment of cars including Alfa’s GTV, 156, 75 and 33 models, while Stock Cars will also be on track, featuring a mixture of V8 Oz Trucks and Chevrolet sedans.

The Miniature Race Car Series field has been boosted by the addition of Legend Cars to the program. These diminutive, motorcycle-engined vehicles are very familiar to speedway fans, and have recently been adapted for circuit racing competition.

Tickets are $25 each day or $40 for a two-day pass; children under 16 are free when accompanied by a paying adult.