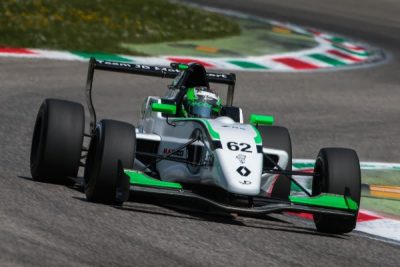 Thomas Maxwell continued his impressive start to the 2018 Formula Renault championship with points in both races at the high speed Autodromo Nazionale Monza.​

With the high levels of talent in the championship there is no guarantee of a top ten finish, but Maxwell is one of only two drivers who have scored points in all four races of the season so far.

Maxwell lined up seventeenth on the grid for the first race of the weekend, but quickly made up ground. By the end of lap one, he had climbed to fourteenth and then claimed another place by lap two.

A safety car brought out by Max Fewtrell bunched the field up and elevated Maxwell to twelfth. When racing restarted, the Australian began to line-up Frank Bird for the overtake for eleventh, whilst also defending his position from Neil Verhagen. After some wheel-to-wheel racing between the three of them, Maxwell found a way past Bird, and eventually past tenth place runner Arthur Rougier, grabbing him the final point scoring spot.

Starting in fourteenth for Race Two meant Maxwell had some work to do, but a strong get away from the line gained him two places going into the first corner. A safety car was then immediately called out after a three-car collision on lap one, which all drivers walked away from unscathed.

Once racing started again, Maxwell began his pursuit of points. He was promoted two places after Max Fewtrell and Yifei Ye both spun off, and then began battling with the likes of Richard Verschoor and Raúl Guzmán. Getting past Verschoor and Guzmán, meant that Maxwell was 7th and in contention for serious points.

Towards the end of the race, the battle between Maxwell, Ye and Thomas Neubauer for sixth place intensified. Maxwell pulled off an impressive overtake on Neubauer on the final lap, but the Frenchman reciprocated the move, pushing Maxwell off the track and allowing himself and Ye to pass. He retained eighth to the chequered flag, but a penalty for Ye promoted him one more place to seventh.

“It was a weekend that shared both highs and lows,” commented Maxwell about his weekend.

“We didn’t have the pace that I would have liked from Free Practice all the way through to qualifying, we were constantly chasing braking instability and didn’t really resolve it until the final race. We struggled to find a perfect brake balance allowing me to maximise the big braking zones at Monza. Not having the raw speed in qualifying and being able to put the car up the front was for sure the low, as I know we definitely had the speed to run in the top 5.”

“On the opposite end of that I think the high was being able to make some really good overtakes and push through the field with some pretty ferocious racing. All in all the results are still solid and we’ve taken a lot out of the weekend that we will be able to apply at other tracks.”

Maxwell is tied 9th in the Championship standings after the second round sitting a mere 2 points off 7th. The championship takes a small break now until mid-May, with the next round being held at the Silverstone Circuit in the UK on the 19th – 20th of May.​​​​​​​