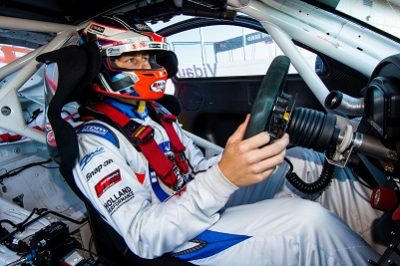 Adelaide teenager Max Vidau has raced to second overall in the fourth round of the 2018 Porsche Michelin GT3 Cup season at Queensland Raceway in Ipswich, Queensland, across the weekend.

The 2017 Australian Formula Ford champion set the pace in practice for the event and qualified on the front row at second fastest, just five one-hundredths of a second away from pole position.

In the first of three races for the event, Vidau took an early lead and pulled a margin from his rivals before an off-track excursion into the fast right-hand Turn 1 corner damaged the front splitter and hurt the car’s downforce.

Vidau maintained the lead by resisting lap-by-lap challenges from Cooper Murray, holding onto the lead for 36 of the 40 laps before succumbing to the understeer he was suffering in the final stages.

“We got off to a good start and pulled a bit of a gap in the early stages,” said Vidau.

“Cooper started to make up the gap and, unfortunately, I made a mistake over the bumps into Turn 1 and lost the front splitter. We managed to keep Cooper behind us for the majority of the race but he did eventually get by.

“The front splitter is only a little strip but it makes a world of difference in these cars, so with the understeer I had to slow down in the corners but we held on to second place.”

Vidau dropped down the field in the second race following an off-track excursion, salvaging sixth place and valuable championship points.

“Race 2 didn’t go to plan,” reflected Vidau. “We made a mistake at Turn 4 and fell a bunch of positions, but we did fight back to sixth.”

With the grid order set by the results of the previous race, Vidau started the third and final race of the weekend from sixth but made a lightning start to be fourth into the first corner and challenging the leaders for the remainder of the race, earning another second-place finish.

“Race 3 was good fun to fight back through the field and I made a great start to get up to fourth by the first corner,” explained Vidau.

“I chased down the leaders and climbed back up to second. It wasn’t my best, but I can take what the team and I have learned into the final races of the season.”

“We will continue to fight and see where we end up,” said Vidau. “We know we have strong race pace, so it’s a case of working as hard as we can to get up there and collect more points.”

The next event on the 2018 Porsche Michelin GT3 Cup Challenge Australia calendar is at Winton Motor Raceway, located just outside Benalla in rural Victoria from August 31 to September 2.