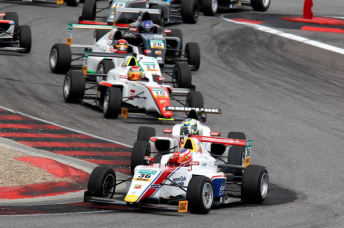 MEDIA RELEASE: For the first time in his 2015 campaign Joey Mawson returns to familiar territory when the penultimate round of the German Formula 4 Championship is contested at the Motorsport Arena Oschersleben this weekend.

The Oschersleben circuit hosted the opening round of the eight event schedule in April with Mawson recording a podium finish behind his Van Amersfoort Racing team-mate Mick Schumacher.

In the ensuing six rounds Mawson has continually added to his podium success to be third in the standings and in with a shot of snaring the title away from his main championship rivals Marvin Dienst and Joel Eriksson.

Victory in the final race of the previous round at the Sachsenring has Mawson confident that he can bridge the 37-point gap to the Championship lead across this weekend’s three races that will be contested alongside the popular DTM Championship.

Mawson will take to the circuit aboard his Van Amersfoort Racing entry for a pair of practice sessions on Friday.  Saturday’s action will consist of qualifying and the opening 30 minute race followed by a pair of races on Sunday.  Race three on Sunday afternoon will see the finishing positions from Saturday’s opening race used to set the starting grid with the top ten being reversed.

What Joey has to say…..
“I’m really looking forward to the weekend, we’re getting to the end of the championship with only six races across two rounds left and the race for the championship is still very much on,” says Mawson.
“We head to the Oschersleben circuit this weekend where I had a good result in the opening round which gives me a lot of confidence.
“The goal for this weekend is to get on the podium each race and close the gap on the championship lead so I can take the fight for the title right down to the wire at Hockenheim.
“Being on the same schedule as the DTM circuit for the first time is very exciting as there will be a lot of fans and many big teams in attendance.”