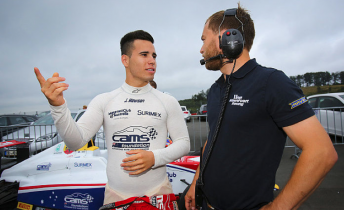 MEDIA RELEASE: Australian Joey Mawson has set his sights on finishing on a high when the German Formula 4 Championship concludes at the Hockenheim circuit this weekend.

Mawson has been one of the front runners all throughout the year to be placed third in the points standings entering this weekend’s final event.

The CAMS Foundation-backed driver comes off a strong previous round that saw him taste victory in the final race at the Oschersleben circuit three weeks ago.

Mawson is currently 54 points adrift of championship leader Marvin Dienst and with a maximum of 75 points up for grabs across this weekend’s three races the Sydneysider is still in with a shot of claiming the overall title.

“The Van Amersfoort Racing team have had some really good results there in the German Formula 3 and European Formula 3 Championships, hopefully I can add to the team’s success this weekend,” said Mawson.

“Being a Grand Prix circuit it is always a pleasure to drive such a fantastic circuit.

“My goal for this weekend is to score a victory and just have a really good solid weekend.  I believe we have a good car, regardless off the championship result I really just want to finish on a high.

“I’m third in the championship and still in with a chance at the title but it’s a bit of a long shot, I really need everything to go my way.  I’m just going to go out there and concentrate on the things I can control by doing my best and everything else will take care of itself.

“It has been an absolute pleasure to work with the Van Amersfoort Racing team this year and hopefully we can finish on a high this weekend before looking to continue our relationship next year.”