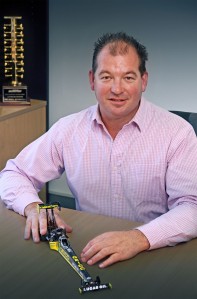 MEDIA RELEASE: Australian Professional Drag Racing (APDR) has taken the next major step in its growth with the appointment of Maurice Allen as CEO.

Allen will be responsible for the day-to-day running of APDR, the parent company of the 400 Thunder and 400 Thunder Sportsman series.

He brings nearly 20 years of business development, sales and management experience to the role, with an extensive background in the automotive and motorsport industries.

Complimenting his corporate background, Allen is a second-generation racer: two-time and reigning Pro Bike Champion and is a multiple Nationals winner, giving him an intimate knowledge of the sport.

“Australian Professional Drag Racing is in a critical phase where effective leadership is required to see it prosper, and I look forward to guiding the company through this period,” Allen said.

“I’m extremely passionate about drag racing. As a racer I want to see 400 Thunder grow, and as a businessman, I know what’s required to make it happen.

“My first task is to identify areas of improvement for APDR, and I can assure everyone that I will be working towards viable solutions in a timely manner.”

For the past eight years, Allen has served as owner and director of motorcycle parts importer and distributor Speedcycle, building the company from a small start up to one of the go-to suppliers for performance and racing components.

Allen has also worked as a Project Manager for a major tool retailer, Business Development Manager at VPW and a Sales Manager at industry leader Peter Stevens Motorcycles.

In these positions, Allen gained widespread experience in management, establishing and expanding dealer networks across Australia, budgeting and finance and liaison.

Meanwhile, as a racer Allen has had major sponsorship deals with Milwaukee Tools, requiring ongoing liaison and negotiations.

Allen’s appointment as CEO has seen him step down as the competitor representative on the APDR board, with his replacement to be announced in the new year.