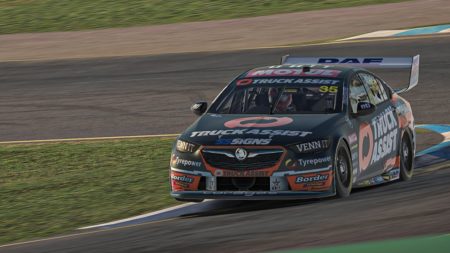 Ahead of the return of  the Supercars Pro and Allstar Eseries Wednesday, Matt Stone Racing are excited to share their driver line up and liveries.

Andrew Gilliam will once again represent the team in the Pro category, after doing a stellar job in
last year’s series.

Since driving for the team in the 2021 Eseries, Andrew has joined the team on a more permanent
basis as a data engineer for our support categories and does part-time work in the workshop
between rounds.

MSR Supercar drivers Jack Le Brocq and Todd Hazelwood will share duties in the Allstar Series,
splitting the rounds between themselves.

Jack will contend rounds one, two and six, while teammate Todd will take the reins for rounds three and four.

Due to a clash with the Penrite Oil Sandown SuperSprint, MSR will call upon a third Allstar driver,
yet to be confirmed, to take the wheel for round five.

This year’s series will also feature two endurance rounds. Andrew and Jack will pair up for the first
of the two at Sandown International Motor Raceway, the latest addition to the iRacing platform as
of June 2022.

The teams unconfirmed third all-star driver and Jack will then trade places for the Bathurst endurance which is scheduled for Round 5 on the calendar.

All drivers will sport look-a-like liveries to that of our real-life liveries with our striking orange and
Truck Assist grey colour scheme.

You can tune into the 2022 Supercars Eseries broadcast every Wednesday night from July 20 –
August 24 on Fox Sports 506, Kayo, 7plus and Sky New Zealand.