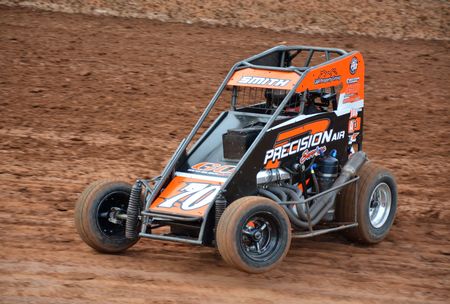 On a night that delivered everything you could possibly expect from an event of such prestige with action, drama, delight and disappointment in equal measure, Matt Smith was crowned 2021/2022 Australian Midget Champion with a stunning run to victory in the 40-lap national title feature race at Archerfield Speedway on Saturday evening (January 29). Having started from position three behind Nathan Smee, who inherited pole position when defending champ Carson Macedo could not get his car to fire and failed to make the start, Smith took the lead momentarily on lap five, only to find himself behind Smee again before the lap was complete. However, on lap eight, Smith went to the front once more and that is where he would remain, with Smee holding second until he smote the wall in turn three and exited the contest, elevating Kaidon Brown to the runner-up position in which he hold firm to the chequer. Having finished fourth in this event on more than one occasion, a relieved Travis Mills would this time find himself on the podium with a third-place result ahead of Michael Kendall. The SA17 of Troy Ware surged late to finish fifth ahead of Brock Dean, Dylan Menz, Brendan Palmer, Lachlan Paulger and Rob Stewart, who only secured a start when Macedo could not take his spot, with Darren Dillon the only other finisher.

Having finished the opening night atop the points table, Smee extended his advantage further when he took out the opening heat of the night over Darren Vine and Menz, who was elevated to second when Vine was excluded by race officials due to an issue with his one-way communicator, putting Paulger into third.

After a frustrating Friday night campaign, Charlie Brown bounced back to secure a win in heat 10, leading home Kendall and Macedo.

Michael Stewart scored his second heat win for the weekend when he prevailed in heat 11, leading Robbie Farr and Casey O’Connell to the line.

Smith and Kaidon Brown served up a preview of their feature race results in heat 12 when they finished first and second respectively, with Rusty Whittaker advancing from seventh to finish third.

Charlie Brown’s topsy-turvy weekend suffered another setback in heat 13 when Farmer got frisky in turn one with two laps remaining. The ensuing contact left Brown on the infield and put Farmer at the back for the restart. Meanwhile, out front, Menz held his nerve to keep Smee at bay for the win, with Palmer home third.

As expected from pole position, Macedo was untroubled in winning heat 14, with Kendall finishing second ahead of Vine.

Whittaker secured his spot in the pole shootout when he outpaced the NSW quartet of Smith, Matt Jackson. Stewart and Kaidon Brown in heat 15.

The final heat went the way of Mills, with second and third respectively from Ware and O’Connell not enough to secure them an automatic start in the feature.

The B Main offered up a glimpse of what could be expected in the feature, with Ware and Charlie Brown using the cushion up high to skip clear of the field. O’Connell and Darren Dillon also secured a berth in the championship feature, with Rob Stewart, Brad Dawson and Daniel Paterson the first of those to miss the cut, although both Stewart and Paterson would serve as reserves for the main. Having endured a very frustrating weekend thus far, Vine was on a charge and had advanced from 12th to sixth after just seven laps, only to find himself on the infield a lap later.

The bronze round of the Pole Shootout was halted when Farr tipped over in turn one, leaving him to start eighth in the main event. Macedo and Mills would subsequently outpace Menz to make the transfer into the silver round to take on Smith and Whittaker, with the latter joining Macedo in advancing to the Gold Shootout to face Smee and Kendall. Having battled an engine issue all night, Kendall abandoned his run, leaving Macedo to outpace the others and secure pole position, with Whittaker locking in a front row start ahead of Smee, all of which was upended when Macedo was unable to make the start of the feature race.

So, with driver introductions complete, the field fired up to get the championship feature underway, only for Macedo to discover that the Complete Parts & Equipment Toyota was not going to cooperate and, despite some frantic efforts from his crew on the infield, the defending champion and pole qualifier was a non-starter, elevating Smee to pole alongside Whittaker and enabling Rob Stewart to join the field. Smee led the field away as Whittaker and Kendall swapped spots three times on the opening lap. When Kendall got a little out of shape in turn two on lap two, Michael Stewart found himself in a spin and subsequently on the infield and, with Whittaker also grassing the Ron Moore Concreting #58 as the field sorted themselves for the restart, three of the front runners were out with just one lap completed. Charlie Brown and Caleb Mills also exited early as Smee continued to lead before Smith took control on lap eight. Mills moved ahead of Kendall for third on lap 12, only for the race to be halted a lap later when Farmer backed his tractor into the turn one wall when a slide-job under sixth-placed Menz didn’t quite go to plan. Underway again and Smith continued to lead Smee, Kendall, Mills and Kaidon Brown, who had started tenth, with Menz, Matt Jackson, Farr and Dean the next in the queue. Lap 12 saw Mills advance to third, with Brown also moving ahead of Kendall on the next circulation. In what, by his own reckoning, might be his last ever outing in a Midget, it was an unceremonious end for Farr when he stopped in turn two on lap 20 and retired to the infield. With Brown having moved ahead of Mills for third, a NSW trifecta looked on the cards until Smee nudged the wall exiting turn two and then found himself unable to steer the car into turn three, resulting in more significant contact with the concrete that brought his challenge to an end with 11 laps remaining. Having stormed through the field from 19th to be running sixth, O’Connell became the next retiree when an engine misfire curtailed his great run. A second spin from Farmer in turn one on lap 35 ended his campaign and bunched the field for a final restart. With Smith, Brown and Mills safe in the top three spots, Jackson pounced immediately to slide Kendall for fourth, only to find himself on the infield a lap later with an engine ailment. Never wavering from his commitment to the high line, Smith remained in control through the final laps to secure his maiden national championship success, with Brown, Mills and Kendall maintaining their positions through to the chequer. With a high attrition rate resulting in just 11 cars going the distance, Ware found himself fifth at the flag as locals Dean, Menz, Palmer, Paulger, Stewart and Dillon rounded out the finishers.

Making his first appearance in Brisbane for the season, Lismore’s Jacob Jolley outgunned the field to win the Wingless Sprint feature race. Jayden O’Toole moved into second spot on lap three and, whilst he was able to narrow the margin to Jolley, he never found himself in a position to challenge for the lead. The battle for third spot provided action aplenty and it was Michael Butcher who ultimately prevailed over Ryan Harris, who started from the outside of row six and whacked the main straight wall at one stage in what was a highly entertaining run. Lachlan Robertson finished fifth ahead of Kevin Willis, Jamie Usher, Andrew Robinson, Liam Atkinson and Stuart Jefferies.

Jolley, Atkinson, Robertson, Jayden O’Connell, Corey O’Connell and Ian Milnes shared the spoils in the heats with a win apiece, while Steve Pilkington bested the field in the B Main. Tim Harris finished second and also advanced to the feature field, with third-placed Clay Seabourne missing the cut.

Despite a pile-up in turn four on lap two that depleted the field somewhat with Amanda Chaffey, Jared Boyes, Noah Ball and Royce Harvey all eliminated, the Formula 500 feature race was easily their best of the season thus far with the opening laps producing some terrific racing at the head of the field as the likes of Brodie Davis, Brady Argles, Tomas Partington and Kaydon Iverson engaged in a fight at the front. Ultimately, it was Partington who emerged from the scrap with a lead that would transition into his second consecutive feature race win. Davis finished in second spot, while a terrific charge from Blake Matthews would see him surge from 12th to finish third ahead of Argles and Iverson. Kurt Wilson was next best, followed by Jake Hooper, Kacy-Lee Black and the final finisher in Cona Stephan.

Iverson, Partington and Kinser Claridge were heat winners, although the latter would take no part in the feature race.

Just seven Lightning Sprints made the effort to attend and, following heat wins to Wayne Jukes and Andy Kimm, it was Kimm who led the field home in the feature race, downing Sean Iacono, Scott Genrich, Scott Jukes and Wayne Jukes.

The next event at Archerfield Speedway is a massive show on February 19 featuring round 10 of the East Coast Logistics Sprintcar Track Championship and round six of the TFH Midget Series, plus Petzyo Development Sprintcars, Wingless Sprints, Microsprints, Lightning Sprints and Formula 500 Juniors.