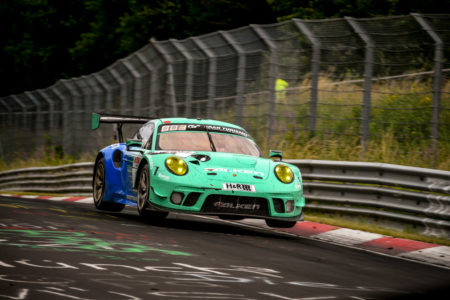 They replace the nine drivers with works contracts, including Australian Matt Campbell, who have had to step down from attending the Nürburgring race on 26-27 September. This reshuffle is the result of three positive Covid-19 tests done as part of a routine check on Porsche employees at the 24 Hours of Le Mans. As a consequence, Porsche Motorsport decided that, for safety reasons, no participant from the French endurance classic would travel to the Eifel.

As such, on Saturday, 26 September at 3:30 pm, four Porsche customer teams will field seven 911 GT3 R in the top SP9 category with reshuffled driver crews. Only the No. 911 Manthey-Racing Porsche, which fans have dubbed “Grello”, will not be part of the 2020 action. Nevertheless, Porsche is still the most strongly represented brand at the long-distance classic, which is held four months later than the original date due to the coronavirus pandemic: About a third of the 100-strong field is made up of 911 and 718 Cayman racing vehicles.

“The health and safety of everyone involved take top priority for us. That’s why the tough decision not to be represented at the Nürburgring by the drivers and employees who attended Le Mans was ultimately a no-brainer. Still, I’m glad that we found a quick solution with our customer teams and that we can compete on the legendary Nordschleife,” says Fritz Enzinger, Vice President Porsche Motorsport. “I’d like to thank the organisers and officials at the ADAC who, in consultation with the relevant authorities, made it possible to hold the traditional 24-hour race on the Nürburgring. Hopefully, this important German motor racing event can welcome many fans from all over the world again next year.”

The race
The Nürburgring is one of the world’s most demanding and picturesque racetracks. The Eifel classic runs over a 25.378-kilometre combination of the Grand Prix circuit and the Nordschleife (northern loop). The infamous Nordschleife, which was given the intimidating name “Green Hell” by three-time Formula One World Champ Jackie Stewart, poses a real challenge for drivers with its rollercoaster layout, changing track surfaces, and many corners and crests. The fact that the race is contested by professional racers through to clubsport drivers makes the 24-hour marathon particularly appealing.

The Porsche customer teams
Porsche provides its customer teams Falken Motorsports, Frikadelli Racing, Huber Motorsport and KCMG with support in their Eifel campaign by contributing drivers from their own squad, among other things. Because of the above-mentioned Covid-19 situation, works drivers Earl Bamber, Mathieu Jaminet (France), Sven Müller and Dirk Werner (both Germany), as well as the two Porsche brand ambassadors Timo Bernhard and Jörg Bergmeister, will take the wheel of the Porsche 911 GT3 R. Frikadelli Racing have directly signed on Norbert Siedler (Austria).

The event on TV and live stream
The Nürburgring 24-hour race will be broadcast on the website www.24h-Rennen.de while many motorsport platforms offer free live-streaming of the Eifel classic.

Comments on the upcoming race
Pascal Zurlinden (Director Factory Motorsport): “Our customer teams contest the prestigious Eifel classic with a completely new driver line-up and are keen to continue the fight for Porsche’s 13th overall victory with the 911 GT3 R. The Nürburgring 24 Hours is a special highlight on the international motor racing calendar. After the postponement to autumn, the weather conditions at the world’s most demanding racetrack are expected to be different compared to previous years. Given the lower number of entries and a strong GT3 contingent in the SP9 category, I’m anticipating a 24-hour sprint.”

Sebastian Golz (Project Manager Porsche 911 GT3 R): “The corona situation throws completely new challenges at us. We had to modify several driver crews at the last second. With the exception of Manthey-Racing’s ‘Grello’, all of our customer racing cars will compete. Of course, it hurts that we have to race without the nine planned drivers. However, thanks to Earl Bamber, Timo Bernhard and Jörg Bergmeister – to name just three – we’ve found strong replacements. We’re grateful they could jump in at the last minute and thanks as well to the teams for their support. Now it’s up to us to make the best out of the situation.”

Earl Bamber (Porsche 911 GT3 R #18): “Normally I’d have been competing in the IMSA series this coming weekend, but unfortunately, that’s not possible for us. Safety first, there’s no doubt about that. On the flip side, the opportunity arose at short notice for us to take part in the 24-hour race. It’s going to be a huge challenge for me because I’m basically jumping in the deep end. It’s great that I can drive for KCMG. I know the team well. I competed in the NASCAR series recently with them. All Porsche teams have prepared intensively with the 911 GT3 R for the toughest race of the year. I’m super excited about my first laps on the Nordschleife.”

Jörg Bergmeister (Porsche 911 GT3 R #18): “I feel sorry for the drivers who should have been behind the wheel. For me personally, the preparation work is far from perfect. This is the first time this year that I sit in a racing car at the Nordschleife – but we’re a team at Porsche. We’ll make the most of the situation and hopefully achieve a decent result.”

Timo Bernhard (Porsche 911 GT3 R #18): “Expect the unexpected – I’m happy to help out, of course, under the current circumstances, even though my first thoughts are with the drivers who can’t travel to the highlight at the Nürburgring. Still, at Porsche, we stick together and support each other. That’s what makes our team spirit. The squad and the drivers in our 911 GT3 R are strong. Even though we weren’t able to prepare properly and it’s been seven years since I last contested a 24-hour race on the Nordschleife, it’ll be okay. I feel a good result is possible.”

Sven Müller (Porsche 911 GT3 R #33): “There’s a new qualifying procedure this year with two ‘top qualifying’ sessions. We haven’t yet qualified for the final session with 18 participants. We’ll have to fight hard to make it into this critical individual time trial. And even if we don’t manage to get a perfect grid spot, I’m feeling confident for the race. We’ve made steady progress in terms of tyre development this year and I think we have a good car.”

Dirk Werner (Porsche 911 GT3 R #33): “In my opinion, the 24-hour race at the Nürburgring is the best endurance event on the world’s most challenging and beautiful racetrack. Falken Motorsports would like to win and I’m aiming to notch up my first victory at this classic. The race won’t be the same without the fans this year. There’s a very special atmosphere with the spectators camping and partying along the Nordschleife. It’s a pity that it’ll be missing this year. With the smaller overall entry list, but many GT3 vehicles competing, it’ll be a fast race. It’ll be exciting!”

Mathieu Jaminet (Porsche 911 GT3 R #911): “I was excited to drive Manthey-Racing’s ‘Grello’, but it is what it is. I know Frikadelli Racing from previous races. The team is extremely professional. We’re coming to the ‘Ring to do our best and to win. I’m feeling highly motivated.”