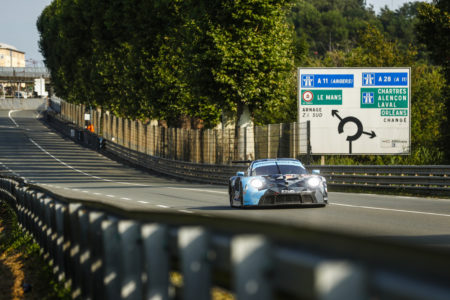 The Porsche works team has set a high benchmark for the 24 Hours of Le Mans. Fielding two Porsche 911 RSR, Porsche hopes to lay the foundation for yet another title win in France. So far in this season’s FIA World Endurance Championship (WEC), the factory squad has secured two class wins from three races. The legendary Circuit des 24 Heures hosts round four on 21/22 August. Porsche again relies on a three-driver crew in each of its cars at the Sarthe. A total of twelve 911 RSR will tackle the GTE-Pro and GTE-Am classes at the 89th edition of the world’s fastest endurance race. The event starts this coming Sunday (15 August) with the so-called pre-test on the 13.626-kilometre-long combination of the circuit and public roads. With 19 overall victories and 108 class wins to its credit, Porsche is by far the most successful manufacturer at the 24-hour race in France.

“We contested Le Mans for the first time last year with the Porsche 911 RSR-19 and we struggled a bit against the fierce competition in the GTE-Pro class,” recalls Pascal Zurlinden, Director Factory Motorsport. “I’m positive we’ll be significantly more competitive this year. We’ve gathered a huge amount of data and experience with our works team and our customer squads, who get the chance this year to field the latest version of the nine-eleven in the WEC. These insights help us find the perfect setup. We also performed strongly on the high-speed track at Monza. Our success there gave us an extra boost for Le Mans.”

The race
The event on the 13.626-kilometre Circuit des 24 Heures at Le Mans is extremely popular with motor racing fans and is the highlight on the FIA World Endurance Championship calendar. The storied circuit south of the city with its 150,000 inhabitants consists mainly of public roads. Normally, hundreds of trucks and cars drive over the legendary Mulsanne straight every day on their way from Le Mans to Tours. Treacherous ruts present special challenges, especially in the rain. Contrary to the original plan, which included a mid-June date for the long-distance classic, the 89th running of the Le Mans 24-hour race will be contested in August this year due to the coronavirus pandemic. Unlike last year, up to 50,000 fans can watch the action live from the racetrack on 21/22 August. This marks the second time that the latest generation ca. 515 PS Porsche 911 RSR tackles the world’s greatest endurance race.

“I’m convinced that we’ll be much more competitive this year,” says Alexander Stehlig, Head of Operations FIA WEC. “In the meantime, we’ve gathered considerably more experience with the car, and the successes at Spa and Monza have been hugely encouraging. There’s no better incentive for us than a win on the high-speed circuit in Italy. What’s important at the 24-hour race is to maintain contact with the leading pack at all times so that we’re in a position at the end to fight for victory. This means that we have to attack right from the start. I think this a promising recipe for success.”

Due to the length of the Le Mans 24-hour race, double the usual points are awarded compared to a conventional six-hour WEC race. As such, the race has often proven to be decisive in terms of the WEC manufacturer and driver standings.

Porsche GT Team drivers
The regular WEC drivers Gianmaria Bruni from Italy and Richard Lietz from Austria join forces with Frenchman Frédéric Makowiecki in the cockpit of the No. 91 Porsche 911 RSR. The Frenchman, who contested this year’s eight-hour race in Portugal, brings a wealth of experience with him. Makowiecki has contested the Le Mans classic a total of ten times – for the last four years sharing driving duties in the factory-run vehicle with Bruni and Lietz. In the No. 92 sister car, Frenchman Kévin Estre and Neel Jani from Switzerland receive reinforcement from Michael Christensen. The trio used the WEC race in Portimão in June to get in sync with each other. Estre and Jani currently lead the drivers’ championship after scoring two class wins from three races. In the manufacturers’ classification, Porsche ranks second just seven points behind the leader.

The customer teams
Two customer teams tackle the 24 Hours of Le Mans with the Porsche 911 RSR in the GTE-Pro class – a category that is usually the domain of factory teams. WeatherTech Racing puts its trust in Laurens Vanthoor from Belgium, Earl Bamber from New Zealand and the American amateur driver Cooper MacNeil. Sharing the cockpit of the identical vehicle campaigned by HubAuto Racing from Taiwan are Maxime Martin from Belgium, Alvaro Parente from Portugal and Dries Vanthoor. The Belgian is the younger brother of Porsche works driver Laurens Vanthoor.

A total of eight of the latest generation Porsche 911 RSR contest the GTE-Am category, with the #77 Dempsey-Proton Racing entry headlined by former Carrera Cup Australia Champions Matt Campbell (2016) and Jaxon Evans (2018) together with German, Christian Ried.

Follow the race via livestream and on the Porsche Motorsport microsite
Via their paid apps, the World Endurance Championship WEC and the Le Mans organiser ACO offer a live stream and live timing.

On its website https://media.porsche.com/motorsport, Porsche Motorsport provides detailed information on the Porsche 911 RSR, the team and the works drivers, as well as the 2021 Le Mans 24 Hours. There, media multipliers will also find the latest updates and news, background stories, image galleries and numerous video features.

Drivers’ comments before the race

Matt Campbell (Porsche 911 RSR #77): “Really looking forward to Le Mans again, it seems pretty crazy that this is already my fourth Le Mans and the fourth with Proton Competition, but it’s the first with Jaxon, which is very cool doing Le Mans with one of your best mates. It’ll be his first time so obviously I will be trying to help him where I can. We have a very strong package but will have to wait and see how it all plays out in the race. It’s a new car this year, so also a new challenge to prepare for the race as we don’t know what to expect but really looking forward to the challenge.”

Jaxon Evans (Porsche 911 RSR #77): “This is something a lot of drivers, specifically sports car drivers dream of participating in, so to be on the #LeMans24h grid in the Porsche 911 RSR is definitely a dream come true for me. Something we’ve been working toward from day one of my racing career, so really looking forward to the opportunity. To be doing it with a team like Dempsey-Proton Racing is pretty special, not to mention teaming-up with two previous winners in Christian Reid and Matt Campbell, my house mate, best mate and Porsche factory driver. It’s a great line-up and I think we have a great shot if all things go our way. But I’m just really happy to be here and making the most of the experience, we had the test day on Sunday which were my first laps here in the RSR and I was lucky enough to race the Cup Car here, so it isn’t completely new to me, but obviously the RSR is a very different machine and it’s a very different environment in the way the teams work. Overall just really excited to be here and proud and thankful to everyone around me who has helped me to get to this stage, so hoping to do them proud when we’re on track.”