Matheson ready to turn up the heat at Nitro Up North

Matheson ready to turn up the heat at Nitro Up North 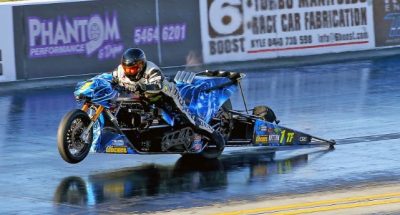 Fresh off his dominating performance at the season-ending Gulf Western Oil Winternationals, Chris Matheson is ready to turn up the heat on his 5 x Championship-winning “Nitro Voodoo” Top Bike, and kick-start a possible sixth title at Hidden Valley’s Nitro Up North event.

The Winternationals on June 7-10th saw a concentrated focus from Matheson and his team to attempt a 5-second elapsed-time and become the first in the Southern Hemisphere to break the barrier.

Willowbank Raceway was primed and provided optimum conditions to get the job done. Initially a number of attempts were lost to tyre smoke, however, Matheson returned on Sunday and made a couple of strong passes.

The run everyone believed to be the first 5-second pass on two-wheels in Australia was also the one we’ll never know as there was a fault with the Willowbank Raceway timers.

“To say we were disappointed was an understatement,” said Matheson. “It felt strong and fast, and I was keen to see just how quick. The bottom end commentator came up to me and told me the bad news about the timers not working, I thought this was a gee up and he was pulling my leg.”

“But that’s all behind us now. I’ve seen the bikes computer data and it showed that we were well and truly in the zone. We’ll just have to do it again in Darwin,” said Matheson.

he opening round of the 2018/19 Top Bike Championship will kick off at Nitro Up North on July 13 & 14. It’s a long haul but Matheson is looking forward to hopping into his truck and driving his Nitro Voodoo transporter to Darwin in a few weeks.

“I’ve been to Hidden Valley before and it’s a great track. The Northern Territorians sure love their drag racing and nitro. While the rest of the east coast of Australia is shivering in winter, up in Darwin, we’ll be enjoying the warm sunshine and wearing shorts.

Racing these machines bring both highs and lows. They are extreme and as such, they come with extreme danger, perhaps more so than being face-to-face with a big croc!

“I’ve had my fair share of wild moments in my career,” said Matheson. One time I remember well was at Hidden Valley Drag Strip for a Top Bike round where I was electrocuted in a bizarre occurrence. During the first round of eliminations, a spark plug blew out of the cylinder head and the lead hit me in the chest, giving me a huge (45,000-volt) buzz.

“The shock blew my hands off the handlebars, which nearly resulted in me being blown off my bike (again). I did get the bike stopped safely and was taken to Darwin Hospital, where I spent some time in ICU.”

“That’s in the past now and in a few weeks we’ll be chasing points, wins and making some fast runs for the fans. We’ll have some tough competition, so it’s going to be a great battle.

“Last year I had some trouble with our rear tyre. We qualified No.1 with a 6.263 ET at 209.75 mph and got past the first two rounds before losing in the final.

Matheson finished, “This year I’m confident we can go one step further and come home with a win. I know this bike is capable of running well into the fives, so get your Nitro Up North tickets because you might just see history!