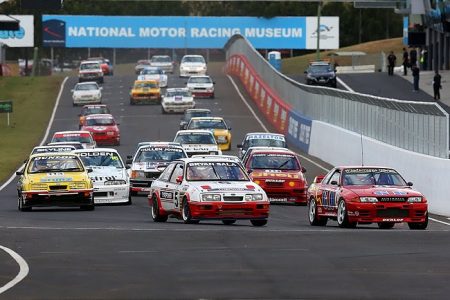 241 entries across a diverse mix of five categories highlight the support race program for the 2019 Hi-Tec Oils Bathurst 6 Hour this Easter.

Hyundai Excels, Production Sports Cars, Improved Production and the Porsche Club NSW Regularity have all attracted more than 50-car fields while Heritage Touring Cars will bring more than 25 classic Touring Cars back to Mount Panorama in a nod to the circuit’s remarkable racing history.

A massive field of 55 Production Sports Cars will see a broad mixture of GT and Sports racing cars tackle the Mountain across a pair of one-hour mini-endurance races – one each on Saturday and Sunday.

No less than nine Aussie-built MARC Cars Australia racers are entered, including the MARC II Racer driven by Adam Hargraves that won its class in February’s 12-Hour.

A huge mix of over and under two-litre Improved Production Cars are headlined by Tasmanian Ray Hislop, who is expected to be a pre-event favourite in his well-known Ford Falcon.

West Aussie Matt Cherry is a regular IP frontrunner, while fans will keep a close eye on the little Suzuki Swift of cult hero Jordan Cox who returns to Bathurst in search of more stunning overtakes that made him an internet sensation.

Queenslander Cameron Bartholomew finished second the inaugural event last year and returns to try and go one better this year, while 2018 polesitter and third-placed overall finisher Asher Johnson will make another trip from Adelaide to try and improve two spots on the famous Bathurst podium.

2018 race winner Cameron Wilson and frontrunners Brock Giblin and Adam Bywater are also back. SA State champion Michael Clemente is expected to be a challenger at the pointy-end in what could be the most competitive field of Excels ever assembled.

Heritage Touring Cars make their Bathurst return this Easter with a 26-car field of genuine cars that raced throughout the 1970s and 1980s in Group C and Group A Touring Car races.

Bathurst legend Bob Holden returns in one of the same AE82 Corolla’s that he raced when the car was new, while a V12 Jaguar XJS to be driven by Anthony Pallas will likely be a fan favourite. Heritage Touring Cars will contest three races across the Bathurst 6 Hour program.

Now a staple at the Easter Event, the Porsche Club of New South Wales has another full grid of Stuttgart’s finest confirmed for their series of four regularity trials across the Friday and Saturday of the event.

The field includes everything from Porsche 944, Cayman and Boxter models through to a broad mix of at least four generations of 911 models, up to and including a raft of GT3 and GT2 entries.

On track action commences with the Porsche Club regularity at 7:50am on Friday morning.

The Regularity field will have four, 20-minute trials across the weekend.

Production Sports will battle it out over a pair of one-hour mini endurance races, while Improved Production, Excels and Heritage Touring Cars will contest three sprint races each.

Races for Excels, Heritage Touring Cars, Improved Production and Production Sports will be streamed live on Sunday morning via the Hi-Tec Oils Bathurst 6 Hour website and social media channels, prior to the 11:30am start of the six-hour itself.

The 2019 Hi-Tec Oils Bathurst 6 Hour will again commence at 11:30am on Sunday, 21 April 2019, while information regarding the broadcast and streaming coverage will be announced soon.