Masons make it three from three

Masons make it three from three 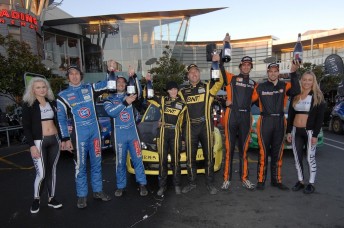 The Masterton pairing of Richard and Sara Mason have taken the honours in the third round of the Brian Green Property Group New Zealand Rally Championship driven by VINZ to make it three wins from three championship starts.

The Masons in their BNT Subaru Impreza mastered the icy North Canterbury roads to win the Lone Star Rally of Canterbury by one minute and three seconds from Nelson’s Ben Hunt and Tony Rawstorn who challenged Mason throughout the event.

Hunt made a fast start on Saturdays nights two forest stages to seize the initial advantage. With temperatures below zero and roads made slippery with patches of ice, Hunt was fastest on both stage to hold a 14.1 second lead overnight, this also despite a problem with his Subaru jumping out of second gear.

Mason then made his move on Sundays first stage north of Rangiora, and in the early morning frost he was 31 seconds quicker to move back into the lead.

A see saw battle over the next few stages with the pair trading times was finally settled in Masons favour when Hunt punctured on the penultimate stage.

The third consecutive victory for the Mason’s place a record fifth National Rally title well within grasp as the championship hits its halfway point.

A consistent performance from Tauranga’s David Holder earned a second consecutive podium finish for the Mitsubishi driver. Holder now moves into third in the championship, in his first season in the outright four wheel drive category.

Te Aroha’s Lance Williams showed great speed in the closing stages to secure fourth overall, and moves into second in the championship.

The tricky conditions provided plenty of challenges for the front runners. Auckland’s Andrew Hawkeswood lost seven minutes on the second night stage after clipping a rock and destroying a wheel.

Class honour were secured by Hawkesbays Max Bayley, who has an uncatchable lead in the two wheel drive category, Christchurch driver Hamish Anderson taking victory in Open 2WD, and Papamoas Andy Martin survived a battle of attrition in the BNT Historic division in his classic Rotary Mazda RX3.

The Brian Green Property Group New Zealand Rally Championship driven by VINZ now heads north to the Wairarapa for the round four on June 28, where Richard Mason has the opportunity to secure a record fifth national rally title at his home event.