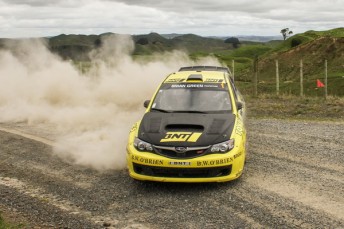 A record breaking year for Richard and Sara Mason was capped off in fine style as the matrimonial paring dominated the GoPro Daybreaker Rally to win by 42.6 seconds, and rewrite more of the record book in the process.

Overcast weather and dry dusty roads provided good conditions for the drivers as they tackled the 196km of competitive kms, making for a great adventure. The return to the roads of the Rangitikei around Taihape was welcomed, with many drivers commenting on how challenging and enjoyable they are to compete on.

While the Masons set about establishing their lead from the start, the race was on to be best of the rest. With Ben Hunt and David Holder also fighting for the minor money in the Brian Green Property Group New Zealand Rally Championship, driven by Vinz, these two started their own duel. That was matched by the next duelling pair of Matt Summerfield and Phil Campbell, where the time differentials were even closer.

As dawn broke over Taihape and then for the circuit of stages around the back blocks of the town, these two groups continued in lock step, trading small margins in time gained or lost. That is until the mighty 43km long stage 7 of Pakihikura. As has been the case in Daybreaker events of old, this proved to be the defining moment on the rally.

Mason was faster than all by 25 seconds, to now have a 1 minute 5 second lead. Hunt also took advantage and being 26 seconds faster than Holder saw Hunt move comfortably in second place. However it was Campbell who failed to fire in this long test. What had been a 2.4 second lead over Summerfield was now a 17 second deficit, as Summerfield went half a second a kilometre faster. Earning Summerfield 4th and bumping Campbell to 5th.

Despite there being four stages still to go, this wasn’t going to be enough to change the placings. Close times through each test saw the leader board remain unchanged. That is except the remote possibility of Mason faltering within sight of the finish line.

While many drivers were complaining of various mechanical issues it was Mason who was now losing time, and his lead was cut by over 16 seconds in the 8km stage 9 alone. With running repairs and work around solutions Mason managed to stem the time loss, despite a broken windscreen, heavy gravel on the roads, a bent rear suspension arm, and a broken shock absorber. Keeping Hunt in second and Holder in third.

In the race for two wheel drive honours it was young versus younger, where the battle of the event started to unfold. Tyson Jemmett in his Honda Civic was fast out of the blocks, but once the sun came up, Max Bayley found his rhythm in the Fiesta R2 and proceeded to pull back the initial time loss.

Keeping the young fullas honest was Brent Taylor in his Toyota FT86, and these three proceeded to swap stage times and placings almost every stage. So by the time they started stage 7 Bayley led Jemmett by only 10 seconds, with Taylor 31 seconds further back. But once again, the 43km monster was about to bite.

Jemmett flew through, 21 seconds faster than Bayley, turning his deficit into a 10 second lead. But Bayley wasn’t about to give up that easily. A fight back in stages 9 and 10 saw Bayley close to be just 0.2 seconds behind, with the 24kms of the last stage to determine the winner.

And it was Jemmett who held his nerve, recording a time 6.7 seconds faster than Bayley and a class win by 6.9 seconds.
In the meantime the race for the final podium place had take on a new dimension as ex national champion Bruce Herbert had powered his Toyota AE86 to within 13 seconds of Taylor. With a final push in the last stage Herbert crossed the line 16 seconds faster, to take the position.

The GoPro Daybreaker Rally will now forever be a special event for Sara Mason. She became the co-driver to have won the most national championship events in NZ history. Matching her husband, who took the title for most number of wins by a driver earlier in the year. With their season being a record breaking one in so many ways, Richard again paid tribute to their friend, mentor and sponsor, dedicating their year to the memory of Greg Horne from BNT.

A return to the spirit of the Daybreaker rallies of old has been a resounding success. The longer format and the quality of the roads makes this a unique event. The challenge for many is just to finish, to be able to win is extra special. Especially in the class battles all the way through the field.