Mason leads rally into the darkness

Mason leads rally into the darkness 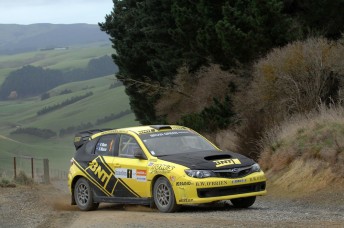 The Christchurch based event on Queens Birthday weekend (May 31st & June 1st) is round three of the 2014 Brian Green Property Group New Zealand Rally Championship driven by VINZ and has the added challenge of night time rallying to test crews.

The Masterton pair of Richard and co-driving wife Sara Mason, have enjoyed a perfect start to the season so far with two wins from two rounds, and will again be the benchmark for the chasing pack in the BNT Subaru Impreza. The Masterton driver can win a record fifth National title this year and has been the class of the field so far in 2014.

Leading the challenge to Mason is 22 year old Canterbury Subaru driver Matt Summerfield who is currently second in the championship after showing great speed and consistency in the opening two rounds. Summerfield, from Rangiora is the leading local hope on the event, which he scored victory on in 2012. Summerfield will be supported by fellow Canterbury driver Matt Jansen, who impressed with third overall at round two in Dunedin on his return to the championship. Jansen is a former national junior champion driving a Subaru Impreza. Both drivers know the Canterbury stages and conditions to provide a challenge to Mason’s current dominance.

Currently third in the championship is 19 year old Lance Williams from Te Aroha, who continues to impress in his Rookie Championship season. Williams will be looking for another good points haul to maintain his lead in the Rookie championship. Tauranga’s David Holder secured his first podium finish on the last event at Rally Otago with second overall in his ex-Hayden Paddon Mitsubishi Lancer Evo. Holder, who is being mentored by New Zealand WRC driver Paddon, has demonstrated fantastic speed since moving to the four wheel drive class, and will be looking to continue his pace from the opening rounds. Another with great pace but having a challenging run with car problems to date is Nelson’s Ben Hunt. A podium finisher at this event last year, Hunt is a genuine front running contender this weekend.

Dunedin’s Emma Gilmour also showed great pace at Otago to be running second overall until a fuel pump failure ended her event. Emma has competed in the opening round of the global Rallycross Series in the United States between events, and after a spectacular debut at Dunedin of his new Mazda 2 Maxi Rallycar, Aucklander Andrew Hawkeswood will be looking to challenge the top of the time sheets in Canterbury.  The standout performer of last year’s Canterbury event, Kaiapoi’s Richard Baddock who finished fourth overall, has had a troubled start to the season, but look for a strong run on his home rally.

Missing from the start list will be the winner of the 2013 Canterbury Rally, Timaru’s Chris West. A high speed roll which ended West’s Otago Rally, badly damaged the Andrew Simm’s Mitsubishi Team car, and with only three weeks between events the team have been able to complete repairs.

The Lone Star Rally of Canterbury in association with Joes Garage commences with a Rally Show and Ceremonial Start from the Palms Shopping Mall in Shirley on Saturday afternoon at 4.45pm, providing a great opportunity to see the cars and drivers up close. Crews then head to the Okuku Forest, west of Rangiora for two night stages on demanding forest roads in the foothills. Sunday’s competition heads as far north as Cheviot for a further six stages. The mix of forest and county road stages, the inclusion of the two night stages along with the cool weather forecasted, including the possibility of snow, mean the Canterbury Rally will have all the elements to challenge drivers.  A total of 153 kilometres of competition will be covered before the victory celebrations on the Finish Ramp will be held from 4.15pm back at the Palms Shopping Mall.

The Lone Star Rally of Canterbury provides great spectator viewing opportunities with a number of Spectator vantage points. A rally map is available free to download from the event website www.autosport.co.nz, or it can be collected from The Palms, Lone Star or Joes Garage Christchurch during rally week. Spectators are reminded to follow the instructions of marshals and ensure they stand well clear of the road’s edge – inside the taped off viewing areas.