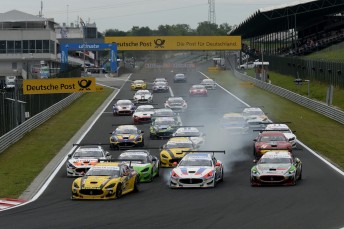 The third round in the Maserati Trofeo World Series, scheduled for the weekend of 20 July at Silverstone, will be the last European round.

The action will coincide with the GT Open International and, after the three races, (two 30’ and one 60’) on the English Formula 1 circuit, the season’s first title will be awarded.

The Trofeo Europa is bestowed on the driver who tops the standings after the European before the three extra-European rounds are run (at Virginia International, Shanghai and Abu Dhabi).

Swiss driver Mauro Calamia is still the most likely candidate thanks to the one-two-three at Budapest and an earlier win at Spa; he now leads on 81 points.

Behind him is another driver from Switzerland: Gabriele Gardel on 61.

The surprise this year is not seeing Renaud Kuppens’ name among the leaders.

The Belgian is off the pace and, this year, will not be able to add the Trofeo Europa to the ones he picked up in 2012 and 2013.

The reigning champion has not had much luck this season and suffered a series of mechanical problems that have forced him to retire on more than one occasion.
In fact Kuppens, and his Konvex Motorsport team-mate Daniel Waszczinski, will not be taking part this coming weekend.

Italian singer and motor-racing fan Max Gazzè will line up at Silverstone.

The star is making a return to Maserati’s single-make series after taking part in the Vallelunga test session, as is Giorgio Sernagiotto.

Sernagiotto finished third in 2012 when paired with Giuseppe Fascicolo.

The American was awarded the win after the officials slapped the top three finishers with a 25-second penalty for not making a drive through given for not respect the track limit.

Taking the other podium slots were Alberto Cola and Renaud Kuppens.

In the endurance event, victory went to Belgian driver Kuppens (who also claimed the Trofeo Europa) from Ange Barde and the Riccardo Ragazzi/Alan Simoni crew.

Maserati Trofeo World Series races can be seen, a week after the event, on Class TV in Italy and on MotorsTV outside the country.