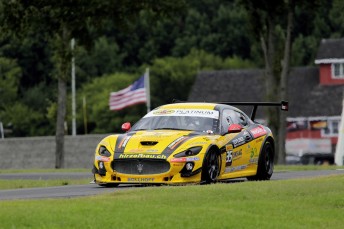 Mauro Calamia, from Swiss Team, took the win in the final race at Round 4 in the Maserati Trofeo World Series.

The action took place at the Virginia International Raceway and saw the Swiss driver turn around a weekend that did not get off to the best of starts.

The series leader made two errors in the sprint events disputed on Saturday, mistakes that saw him finish outside the points and brought his title rival Riccardo Ragazzi a step closer.

The Italian finished second in the first two races but still picked up the full points haul as guest driver Michael Bartels claimed both races. Still, Calamia remains in overall command courtesy of his endurance win (where more points are awarded) and his three pole positions.

At the start of Race 3, Bartels wasted no time in profitting from Calamisa’s indecision to take the lead. This time the Swiss man bided his time until the pit stop, counting on the 20-second handicap Bartels had to work off.

The round of stops altered the standings with Calamia back up front, a lead he held until the end. Behind him came Alan Simoni (despite a 5 second penalty) the Tyler McQuarrie/Patrick Byrne crew and Bartels.

Nick Mancuso came in fifth after lining up in tenth. Mancuso was holding a podium spot at one stage before being reeled in by the US crew and then Bartels.

In sixth came Ragazzi with Giuseppe Fascicolo next following a race-long tussle with Mark Turley (eleventh). Also making a remarkable comeback was Michael Cullen: he finished eighth from a starting spot of twenty-first.

At the end of the endurance race, Bartels climbed out of the No.33 GranTurismo MC Trofeo and into the Maserati MC12 GT1 Centenario for an exhibiton lap in front of the VIR crowd.

The car is owned by Nick Hommerson and is a unique version of the Maserati MC12 Versione Corse, sprayed by hand with images that recall some of the most important chapters in Maserati history.

The US weekend, and the post-Silvertone test session, saw the #SensingSpeed project make its debut. The innovative technology has allowed visitors to the Maseraticorse site (sensingspeed.maseraticorse.com) to live the excitement of the circuit in real time with speed, sound, track position and the drivers’ heartbeat all monitored.

During the race, it was possible to keep tabs on Nick Mancuso, Damon Ockey and the Jim Taggart/Tom Long and Patrick Byrne/Tyler McQuarrie crews (a project video is available at: https://www.youtube.com/watch?v=xf1j48B8XKA).

The next round, the season’s fifth, is scheduled for 12 October at the Formula 1 circuit in Shanghai, China.

Mauro Calamia: “It was a seesaw weekend: it began very well with two top times in qualifying but I then made two mistakes that cost me in Races 1 and 2.

“It was disappointing as all the team’s hard work went to waste. Luckily, after these two slip ups, I turned things round in the endurance race where I didn’t have the disadvantage of a time penalty.

‘In the end I scored a very important win in terms of the series and this has boosted my confidence”.