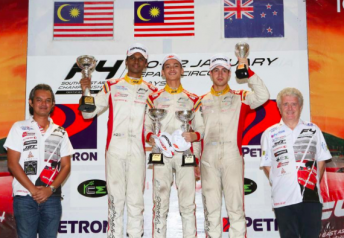 MEDIA RELEASE: After completing five events in its inaugural season, the sixth and final event in the Formula 4 South East Asia (F4/SEA) Championship – certified by FIA finally got underway on Saturday at the Sepang International Circuit.

The bumper-packed schedule kicked off in the early hours with the final free practice session of the season.

The session belonged to Indonesia’s Presley Martono (INA, Car #32) who was able to make the most of the cooler track conditions to post the quickest time of the session.

After a short breather, the young drivers were back strapped into their cars for the qualifying.

Martono once again dominated the session topping the timesheet with a 2.11.563s to claim the prime spot on the grid in pole for Race 1.

Bolstered by being on home soil, Malaysian youngster Isyraf Danish (MAS, Car #19) was third quickest with his 2:12.096s effort.

The first of four scheduled races at noon promised an exciting affair with the main protagonists in the running with Martono starting ahead of Frost and Isyraf Danish.

That race would however see an unfortunate collision between Martono and Frost at the start that would end both drivers’ races early on.

Having inherited the race lead as a result, it was the Malaysian Isyraf Danish who would romp home to an emphatic win, with compatriot Eric Louis coming home in second position to make it a double celebration for the host nation.

With the dust barely settling after the first race, the drivers were back in their cars for the second race of the day in the early afternoon.

In what proved to be a superb recovery drive following his non-finish in the first race, the accolades went to Martono who edged out Kahia after a blockbuster action-filled 8-lap race.

Finishing the race in third place after a hard-fought battle was Race 1 winner, Isyraf Danish following a captivating sprint to the finish line against Frost. Rounding off the top-five was Eric Louis.

The bumper-packed schedule again saw a quick turnaround for the drivers as they returned to their racecars for Race 3 not long after concluding Race 2.

With grid positions determined by the drivers’ finishing positions from the previous race, Race 3 also had the added twist of a reversed grid for the top 50 percent.

After a superb start, it was the Singaporean Danial Frost who snatched victory reversing his misfortunes from a non-finish in Race 1.

Finishing in second following a tough defensive drive was Martono who just edged out Isyraf Danish in what was a photo-finish to the chequered flag. Oman’s Al-Wahaibi took fourth place ahead of Akash Gowda of India.

The fourth race of the day would also provide plenty of action throughout the 10-lap affair.

Coming home with his second win of the day was Martono who had to work hard to defend the position right up to the end from Isyraf Danish, who had to settle for second after an epic sprint to the chequered flag.

In third place was Kahia ahead of Frost in P4 with Al-Wahaibi rounding off the top five drivers.

The final two race of the inaugural season will take place on Sunday morning with the final Fuji Xerox Star Driver of Event 6 set to be determined at the end of the day’s proceedings.

Unlike previous events, the F4/SEA Overall Champion and F4/SEA Overall Rookie champion titles will be awarded later on Sunday evening at the Meritus AAA Awards Gala night also at the Sepang International Circuit.