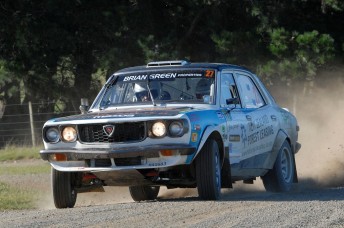 Tauranga’s Andy Martin is looking forward to tackling another new event to him, the Trusthouse Racetech Rally Wairarapa, which is round four of the Brian Green Property Group New Zealand Rally Championship driven by VINZ.

Martin and co-driver Matt Hayward took their maiden win in the Historic class of the NZRC at the previous round, Rally Canterbury, and with the New Zealand Forest Leasing Mazda RX-3 spending more time in the Palmside workshop between events, Martin is looking forward to driving a car that ‘does everything it should.’

With the Mazda handling the way it should be, Martin is looking to move away from the ‘down the middle of the road’ approach and with the encouragement of sponsor Super Fence, adopt more of a ‘fence to fence’ style attack, that should give him the edge in the battle with Ron Davey’s Ford Escort.

“I can’t wait to get behind the wheel of the car again, the guys at Palmside did a great job prior to Canterbury and I’m sure it will be even better this time out,” says Martin.

“Although we’ve got a couple of forests in the area, I’ve never done the event before but I’ve heard plenty of good things about it.”

Meanwhile, Hayward has his own reasons to be confident of a good result.

“Well the event starts at a brewery and really that has to bode well for us,” he states. “That, added with Andy’s new drain to drain approach and the improvements in the car, will probably be enough to scare the crap out of me.”

The Trusthouse Racetech Rally Wairarapa gets underway on Saturday June 28, leaving the infamous Tui Brewery in Mangatainoka from 7am.

Crews will tackle nine stages totalling 163.18km of special stages before finishing back at the Solway Hotel in Masterton at 5.30pm.