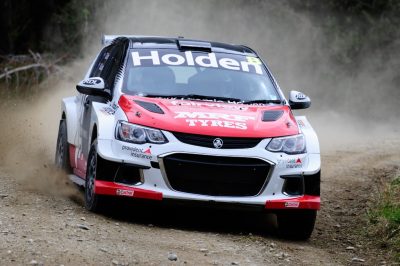 The two Holden Barina AP4+ cars are looked after by Marston’s family business RDL Performance, whose crew have put in numerous hours of development work on the cars since the conclusion of last year’s NZRC season at Rally New Zealand when Marston was amongst the first day’s frontrunners.

This season, Marston and Murphy, from Christchurch and Havelock North respectively, are pleased to have had the opportunity to contest events to thoroughly shakedown the cars before the championship commences in Dunedin this weekend. Both drivers ran at March’s very fast club-based Westland Rally with Marston taking a handy fifth place finish and Murphy running in the top ten for much of the one-day rally before an electrical issue prevented him making the finish. Marston also took second place at the Autosport Car Club’s Cust Rally Sprint in March and was second again at the Ratec Club’s Taumutu sprint last weekend. Earlier, Murphy got his Barina out for a strong run into fifth at February’s Leadfoot Festival and took third at the final round of the New Zealand Hillclimb Championship in March in Hawke’s Bay. The cars’ reliability at all events has lifted the hard-working team.

Both aim to make the finish of Rally Otago. Its 281 competitive kilometres are divided into 17 special stages and take competitors from the Dunedin rally base north to Palmerston and south to Milton.

“Being a two-day rally, it’s especially important to finish,” says Marston who has Gore’s Andrew Graves alongside in the co-driver’s seat. At Rally New Zealand last November, we were challenging for a podium. Now I feel with the massive amount of offseason development we have done, we can continue to aim for podiums in 2018.

“Rally Otago is a great event. The roads are fast and flowing, plus being the first NZRC round of the year, it’s always interesting to kick off the season officially and see how other competitors will shape up.

“The car is feeling great,” Marston says of his Barina which will sport #10. “Our guys at RDL have been working on upgrades since last year and it’s all looking good. There’s some rain forecast leading up to and during the rally, but that won’t worry us.”

Murphy is equally excited to get back behind the wheel of his Holden rally car, which carries his well-known #51. “Given I missed Otago last year, I can’t wait to get back there this week. I was having a ball in 2016 until I stuck the Chevette (competing in the Classic Rally) in a ditch.

“Obviously this is a completely different challenge but driving an AP4+ car is just a huge amount of fun. Being run over two days, this rally offers the chance to spend a lot of time behind the wheel – exactly what I need. I want to make sure I maximise the opportunity as this will only be a good thing for the rest of my 2018 campaign.”

Murphy has Timaru’s Mark Leonard as his co-driver, saying the car was feeling great for the pair of them at Westland a few weeks back. “Even though we didn’t get to the finish because of the electrical issue, it at least gave me the chance to get a small head start for this weekend, especially being we had our new EXT suspension on board for the first time.”

Murphy also pays credit to the RDL Performance team. “They’ve been completely flat out since Westland getting my engine rebuilt as part of the season prep and giving the rest of the car a well-deserved birthday. Thanks again to all our sponsors, especially Penny Homes, RDL Performance, Rubber Developments and MRF Tyres, for coming on board again in 2018. It’s going to be another fantastic season of rallying!”