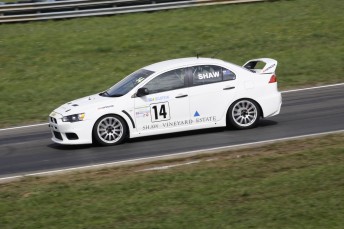 The New South Wales Production Touring Car Championship (PTCC) is set for its biggest event of the year, the Shaw Vineyards Corsa Duo Ore Two Hour Super Enduro, as part of the AASA NSW State Championships at Wakefield Park, 17-18 May. The event will feature a two-hour endurance race with a compulsory five-minute pit stop for refuelling. While many teams will run two drivers per car, competitors may elect to stay in the car for the entire duration if they wish. NSW PTCC president Gerry Murphy, who will drive alongside Michael Caine in a BMW M3, says the event is set to become an annual fixture in the series calendar. “It’s obviously a work in progress and this is the first time we’ve run such a long race, and the first time we’ve included refuelling as part of the deal,” Murphy said. “We want it to become our marquee race each year. The “Corsa Duo Ore” name celebrates the Italian backgrounds of many drivers within the category and the endurance format increases the amount of track time for our competitors.” Passionate PTCC supporter and event sponsor, Graeme Shaw, was buoyed by a podium finish in the series’ first round at Wakefield Park back in March aboard his Mitsubishi Lancer Evo X. Shaw will be joined for the enduro by the accomplished Rick Bates, a competitor in many disciplines of motorsport including rallying and V8 Supercars. “I’m really looking forward to sharing my car with Rick, he’s extremely experienced and very fast,” Shaw said. “I will be able to compare my data to Rick’s throughout the weekend, and it’s a great opportunity for me to learn and improve my driving. “I decided to sponsor Production Touring because it’s a very strong, well-organised category and there is a lot of respect between the competitors. “Shaw Vineyards is a small winery in Murrumbateman and we specialise in red and white table wines; our best products are Riesling and Cabernet Sauvignon. “Sponsoring an established category like PTCC increases recognition of our brand, and a lot of the competitors do enjoy a glass of wine after the racing has concluded!” Other notable entries for the PTCC Corsa Duo Ore include a number of high-powered HSV Clubsports and GTSs, including the VZ of racing newcomer Joe Krinelos who will be joined by series regular, Tony Virag. “Tony’s bringing the experience and I’m bringing the enthusiasm,” Krinelos said. “We’re hoping to have a strong car, the engine has been rebuilt recently and should be reliable, so we’re aiming for a podium against some of the smaller cars.” Other categories on the AASA NSW State Championship program include Super Trucks presented by Canberra Trucks, Miniature Race Cars, Pulsar Challenge, Mazda MX5 Cup, Superkarts, Super TT, NSW Excel Racing Series, Australian Swift Racing Series and PRB Clubman Series.