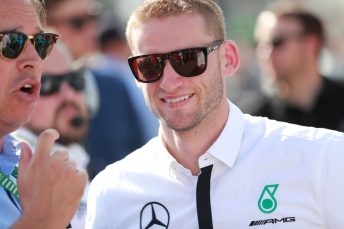 MEDIA RELEASE:  January is the month for long-range classics. After the opener in Dubai and the 24-hour highlight in Daytona, the season now continues without any let up with this weekend’s 12-hr race at Bathurst.

From Daytona to Bathurst: Exciting times for Maro Engel! Last Thursday, the Mercedes-AMG DTM Team confirmed that he will be returning to the DTM. Shortly afterwards, he was at the wheel of a Mercedes-AMG GT3, contesting the legendary 24 hour race in Daytona. “Unfortunately, we had a bit of bad luck with the pit stop, and made contact a couple of times with other cars during the night,” said Maro, who placed 18th along with Tristan Vautier, Kenny Habul and Boris Said. “You’ve got no chance in a 24-hour race if you’re out of luck.” And so, it’s a good job that Maro will have another opportunity to achieve a good result next weekend in Bathurst’s 12-hr race. By the way, two more ex-Mercedes-AMG DTM drivers will also be in harness in Australia, namely, record-breaking DTM champion Bernd Schneider and Mathias Lauda.

Nail-biting finale: Mercedes-AMG Motorsport made a successful start in the IMSA WeatherTech SportsCar championship. Riley Motorsport – Team AMG secured third place in the GTD class on their debut in this extremely important North American sports car series. Adam Christodoulou (GBR), Mario Farnbacher (GER), Jeroen Bleekemolen (NED) and Ben Keating (USA) shared the cockpit of the Mercedes-AMG GT3 bearing start #33 fielded by the American team in the prestigious Daytona 24-hour race. By the end of this 55th running of the event and after 634 laps of the old-established Daytona International Speedway, the four drivers were in contention for a possible win in the GTD class, in which vehicles start under international GT3 regulations. They finished the race with a deficit of only 5.579 seconds on the winner of the 24-hour race. The second-placed driver was just 0.293 seconds adrift, and the first five cars crossed the finish line within just nine seconds of one another – a real nail-biting finale!

Off to Bathurst: It’s one long-distance classic after another, as the 12-Hours of Bathurst will take place at Australia’s Mount Panorama Circuit this weekend, February 3rd – 5th. The line-up down under will include three Mercedes-AMG GT3s with car #22 prepared by Mercedes-AMG Team STM/HTP Motorsport, the #83 of HTP Motorsport and Hogs Breath Café’s #61. The teams will be supported by DTM driver Maro Engel and five time DTM champion Bernd Schneider, who won Bathurst in 2013, which means there will be three former Bathurst winners in the Mercedes-AMG squad altogether with Craig Baird and Shane van Gisbergen. Since 2012, Mercedes-AMG – still running the Mercedes-Benz SLS AMG GT3 – have racked up one win, two second and three places at Mount Panorama. The Mercedes-AMG GT3 will be making its debut this year with its first appearance in the line-up for this legendary classic of the Australian motor racing season.

Beast of the Green Hell: The Mercedes AMG GT R notched up another first at the Nürburgring-Nordschleife just before the start of the New Year in a test drive carried out by “sport auto”. With a time of 7.10.9 minutes, the new spearhead of the AMG range was faster around the Green Hell than any other road-going sports car tested so far by the specialist magazine. Bernd Schneider will also now get his first chance to make the ‘Beast of the Green Hell’ really fly during demo laps of the 6.213-kilometre Mount Panorama circuit. What’s more, for the third year in a row, the high-performance brand from Affalterbach will provide the safety car, a Mercedes-AMG C63 S, for the meeting.

You’re off straight from the 24-hour race in Daytona to the 12-Hours of Bathurst. How do you expect to do?
Maro Engel: The long distance races in Dubai, Daytona and Bathurst made a fantastic start to the year for me. Things in Daytona didn’t go so well, unfortunately, so we’ll now have to mount an all-out offensive this weekend in Bathurst! The race is very demanding, and everything must be dead-right to win. Nevertheless, our goal is to triumph there.

How have people reacted to the announcement of your return to the DTM?
Maro Engel: I’ve received lots of thumbs-ups, both from colleagues as well as from friends and fans. One or two were a bit surprised, though. Still, it feels really great to be able to surprise people with this news. The DTM is a big challenge. The series has continued to develop since my last DTM race. The way of working has become even more professional, and every detail has been improved. We can really look forward to 2017. More power, a little less downforce, new tyres, the DTM is on the right path. These changes will not only make driving more fun for us, they will also produce more amazing racing action for spectators. That’s what we want to see in the DTM. We drivers want to battle one another out on track and get involved in exciting scraps.

What are you most looking forward to in 2017, scrapping with your team-mates or with the opposition?
Maro Engel: I’ve already had plenty of scraps with Edoardo in Macau, so of course, I’m really looking forward to locking horns with him in the DTM, but at the end of the day, we’ll be pulling together, as we’re now team-mates at Mercedes-AMG, that’s what comes first. However, there are a couple of other guys I still know very well, such as Bruno Spengler and Matthias Ekström, for example. You can always get straight down to business with the pair of them, and so far, things have always turned out very well for me in battles with them.

#Thanks: Before the new DTM season gets under way, we’ll be saying goodbye to four drivers who have successfully driven for the Mercedes-AMG DTM Team in recent years. Maximilian Götz, Daniel Juncadella, Felix Rosenqvist and Christian Vietoris will be facing fresh challenges this year. Thank you very much for your dedication and all the best for the 2017 motor racing season!