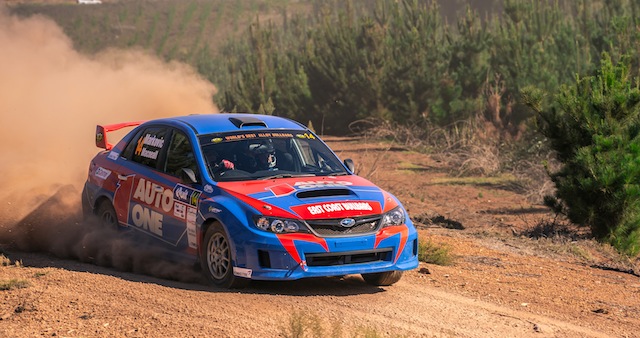 MEDIA RELEASE: Rally – Auto One’s Brad Markovic and Glenn Macneall will be back out on the gravel for round two of the 2015 Onslow Contracting WA Rally Championship (WARC), the Trade Hire Donnelly Rally, on Saturday, May 9.

The boys had a tremendous start to their campaign for this year’s state championship winning Heat One of the opening round, the Quit Forest Rally.

They also finished as the highest-placed WA team from the EBC Australian Rally Championship section of the multi-championship event.

But the rally wasn’t without its challenges for Markovic and Macneall, who are competing in their second season together.

Their Subaru WRX developed an engine issue in Heat Two and the pair has since learned how lucky they were to make it to the finish.

“The engine actually holed a piston,” Markovic said. “We were very fortunate to get through the entire rally. The car could have stopped at any time.”

In preparation for the Trade Hire Donnelly Rally, the Maximum Motorsport-prepared WRX has been fitted with a new engine and Markovic said: “We’re really keen to get back out there to try it out.”

“We’ve also got a new turbo and the latest and greatest LED spotlights that Lightforce has produced.”

“I think the LEDs will give us a huge amount of confidence for the three nighttime stages,” he said.

“It’s the kind of rally where you can make up a lot of time but you can lose a lot as well,” Markovic noted.

“You’ve just got to get out there and find a good rhythm.”

Markovic said he would keep a keen eye on Doug Tostevin and Rob Webber who he sees as his strongest rivals for the 2015 WARC.

Currently, he and Macneall are ahead of both on the pointscore.