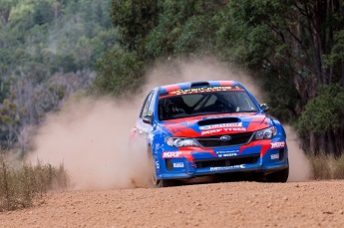 As WA rally driver Brad Markovic continues to recover from back surgery, he’s focusing on making 2018 his most successful year in the CAMS Australian Rally Championship yet.

“Right now, I’m concentrating on being in the best shape I can be and evaluating my options for next year,” he said.

As a part of planning for 2018, Markovic will head to New South Wales for the Kennards Hire Rally Australia in two weeks.

Markovic admits he’s gutted not to be competing in the event where, last year, he was the third fastest Australian in the FIA World Rally Championship section of the event and the first West Aussie home.

“I’m frustrated I can’t drive, but I’m heading to Rally Australia on a recce mission,” he said.

“The plan is to speak with some of the international teams about different options and different cars.”

Markovic will also support Maximum Motorsport team mate John O’Dowd, who will compete in the ARC2 final in his absence.

While 2017 has been a challenging year, Markovic is able to reflect on the positives of his first season with co-driver Toni Feaver.

“What we can take away from this year is that, when everything is running well, we can compete at the top level,” he said.

“Toni and I work really well together and she’s as keen as I am to get back out competing,” Markovic said.

Markovic, who went under the knife in September to relieve long-term back pain, is set to take his rehab to the pool in the coming days and will continue working with his physio.

“It’s frustrating that my recovery has taken long than I hoped, but I’ve been told I need around three or four months to get there and it’s only been two so far,” he said.

Markovic and Feaver are set to make their competitive return when the 2018 ARC season gets underway next March.