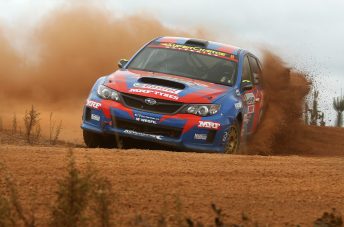 Brad Markovic has described his podium finish at round two of the CAMS Australian Rally Championship (ARC), the Make Smoking History Forest Rally, as a ‘fairytale’.

Markovic set consistent stage times across the weekend to claim third outright in the ARC competition at the southwest WA event. He was also the fastest WA driver.

“We were rapt with our pace all weekend,” he said.

“It’s a very different story to last year, because that’s the stage where my car burnt to the ground,” Markovic said.

“It feels amazing that, 12 months on, I’m celebrating my first-ever ARC podium finish, and at my home event too.”

“This is a great result for Maximum Motorsport, our family and friends, and all our supporters,” he said.

Markovic’s Subaru WRX STI ran like a dream across most of the Busselton and Nannup stages, but he lost some time when a rock caused a puncture in Heat Two.

“We hit a rock on stage 14 and the right front tyre went straight down,” he explained. “We had to drive about seven kilometres out on a rim.”

“But, we didn’t lose too much time in the scheme of things.”

Markovic said he and co-driver Toni Feaver went into the Make Smoking History Forest Rally with a new game plan.

“We decided to just go out and try to find a pace and a rhythm, rather than concentrate on our stage times,” he explained.

Markovic said that tactic worked well and he’d use it again for the next ARC round.

Round four is the FIA APRC National Capital Rally in Canberra from May 26 to 28.