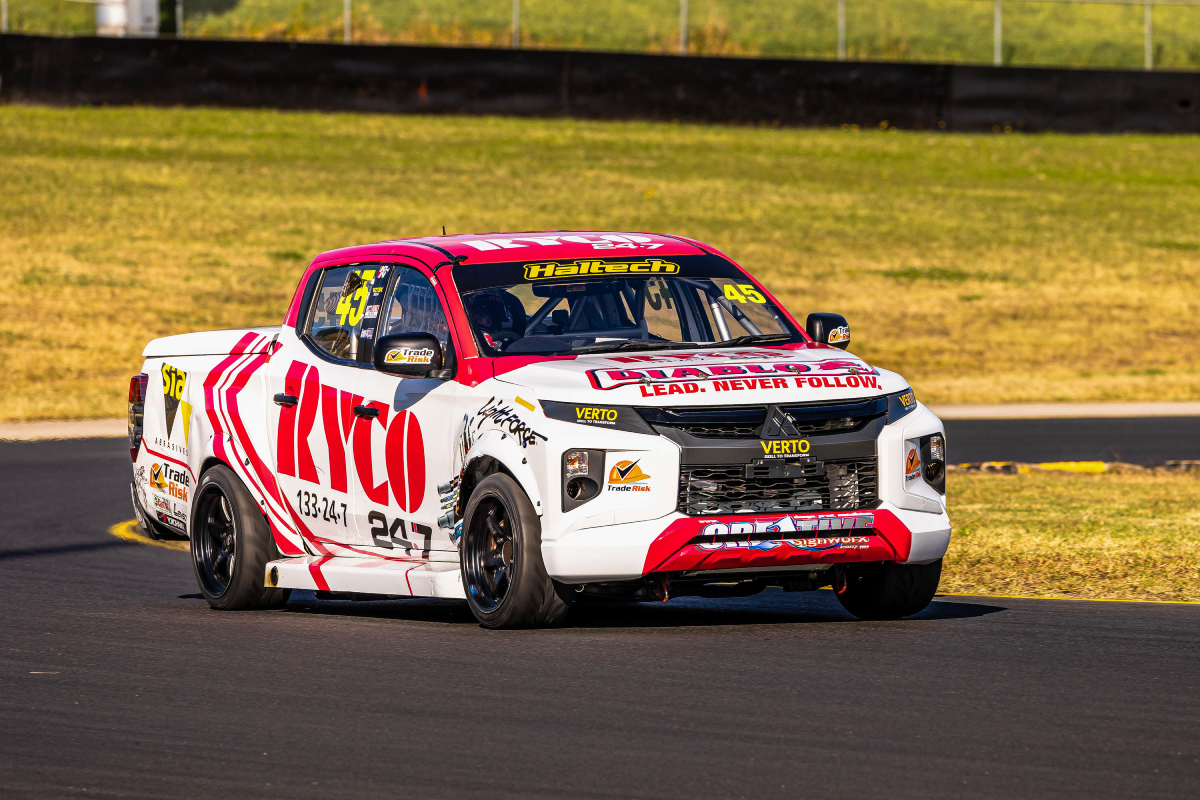 The West Australian – who contested Super2 from 2016 to 2019 after making a name for himself in the V8 Utes Series from 2013 to 2015 – will steer the #45 RYCO 24•7 Racing Mitsubishi Triton prepared by Sieders Racing, sitting in for Craig Dontas who is recovering from a hand injury sustained during the previous round in late May.

Despite being a podium finisher in the former V8 Ute Series, this week’s mid-season SuperUtes test at Sydney Motorsport Park was the 29-year-old’s first laps behind the wheel of the Triton after three years out of the seat.

“I can’t wipe the smile off my face because it’s been a long time since I’ve gone racing,” Marjoram said.

“After my first session in the car, I was super surprised actually with how lively the SuperUte is.

“It requires a very unique driving style compared to the Supercar and the old Ute but that’s what makes it such a challenge.

“It rewards precision, just small inputs, but the feedback is fantastic.

“I’ve actually got my ‘feel’ back again which has given me a fair amount of confidence as well.

“I’m keen to get to The Bend, race a very talented field, and learn a track I’ve never competed at before.”

Since retiring from racing three years ago, Marjoram has focused on building his Auto One Morley store on the outskirts of Perth, WA.

Round 4 in South Australia will see him engineered by Clifton Campbell, with Dontas also on hand trackside across the four-race weekend.

“Craig [Dontas] and I go way back to the original V8 Ute days and his engineer Cliffy Campbell was my engineer in 2015 when we almost won the V8 Ute championship.

“I’ve really got to thank Craig, RYCO 24•7 and all of his sponsors for giving me the opportunity and having faith in my ability to do a good job,” Marjoram added.

Having claimed one race win and two additional podiums during the 2022 season, the sidelined Dontas said Marjoram is a successful addition to Team Triton in his absence.

“Adam and I worked closely as team mates back in the V8 Ute days with Erebus Motorsport and he was fast, and I feel really was at the peak of his career when banging doors in the good old Utes,” said Dontas.

“Importantly, too, we both share a great relationship with our engineer Clifton so overall it will form well for success.”

Marjoram – who was born and bred in Perth – started racing karts at the age of six, winning three state championships and 12 state titles.

Following stints in Saloon Cars and the Porsche GT3 Cup Challenge, Marjoram switched to V8 Utes in 2013 and came fourth outright in 2015.

A regular on the podium, he made the switch to Super2 in 2016 and competed with both Matt Stone Racing and Image Racing before calling time on his professional racing career at the start of 2020.

Round 4 of the Haltech V8 SuperUte Series will take place at The Bend Motorsport Park, Tailem Bend, South Australia, from July 29-31, 2022.