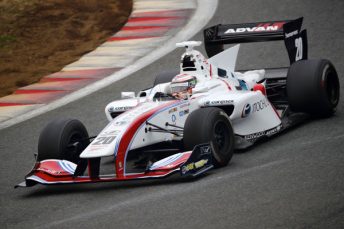 TWIN-RING MOTEGI, Japan (September 12, 2017): Former “Gamer to Racer” Jann Mardenborough was on the charge in the latest Super Formula race in Japan at Autopolis last weekend – charging through the field with a two-stop strategy and scoring the fastest lap of the race.

Mardenborough brought his Itochu Enex Team Impul machine home in the points, setting the fastest lap — a 1:30.197— en route to his third top ten of the season.

Mardenborough’s impressive race began as soon as the green flag fell, moving up from 14th to 8th in the very first lap. Whist F1-bound Pierre Gasly got the headlines, Mardenbourgh was setting fastest laps of the race during each phase.

He continued to work his way through the field, advancing nine positions in just seven laps of racing before the pit stop cycle began.

While most of the drivers stuck to a one-stop strategy, Mardenborough made two stops during the 54 lap race. Amongst the two-stoppers, Mardenborough was consistently the fastest, and the only one to finish in a points-scoring position.

“That was a fun race. The car was really good in race conditions and it was great to be mixing it up with the guys at the front,” Mardenborough said.

“Doing a two-stop strategy meant we had fresh tyres for a lot of the race but we had to keep fighting our way through the pack which is a challenge because these cars have plenty of downforce and it is not easy to pass.

“We’ve got three races left in the season including a double header at Suzuka. These cars are just awesome to drive around there.”

Mardenborough will be back in action in Super Formula at Sportsland Sugo on September 23-24 before returning to Super GT action.

He will rejoin Hiro Yasuda aboard the Calsonic Nissan GT-R in Thailand on October 7-8. Last year Mardenborough finished second in Thailand in the GT300 class in his first race at the Chang International Circuit.