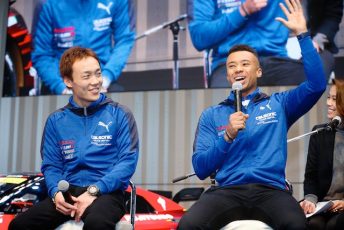 MEDIA RELEASE: Jann Mardenborough is set to embark on the next step of a remarkable racing career which is only six years old – becoming a factory GT500 driver for Nissan in the Japanese Super GT championship.

Mardenborough was announced on Friday as a driver for the No.12 Team Impul machine which bears the colours of Calsonic – one of the most iconic liveries in global motorsport. The blue colours have adorned Nissan racecars for many years including in Super GT, Group A Touring cars and even the 24 Hours of Le Mans.

Mardenborough made his full-time Japanese debut last year in the GT300 class in Super GT and also drove in the Japanese Formula 3 championship.

Race-winning success in both championships have pushed him into the spotlight in GT500 in 2017 alongside Hironobu Yasuda.

Mardenborough, Yasuda and fellow Super GT drivers Tsugio Matsuda and Ronnie Quintarelli (GT500 No.23), JP de Oliveira and Daiki Sasaki (GT500 No.24), Satoshi Motoyama and Katsumasa Chiyo (GT500 No.26) and Mitsunori Takaboshi and Kazuki Hoshino (GT300 No.3) were introduced as the 2017 line-up yesterday at Nissan’s global headquarters in Yokohama.

“The car is amazing. I tested recently in Sepang for the first time in the new car and it’s got so much grip,” Mardenborough said.

“I didn’t expect it to be so particularly quick in the slow speed corners. It’s a massive step up from GT3 and anything I’ve been used to in the past in a car with a roof.

“There’s a lot of testing coming up and the first round is in Okayama in a few weeks time. I’m very pleased to have been given this opportunity by the team and by NISMO.

“It’s going to be coming up on six years now since I won GT Academy. From complete gamer, no experience in a car to the fastest GT cars in the world, I’m very honored and very happy.

“Working with the team, the team have got so much history and the team owner, Hoshino-san has won so many races in the past and to have him as a team manager is incredible because all he wants you to do is just push, give 100% and push.

“So to have him as a team manager in GT500 is fantastic. I’m looking forward to working with everybody, my new teammates, Yasuda-san, and I just can’t wait to jump in the car for the next round of testing in a few days time.