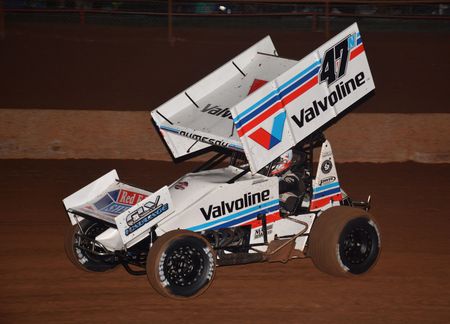 Seemingly unburdened by the pressure of carrying a surname so firmly entrenched in Australian Sprintcar folklore, Marcus Dumesny delivered a stunning performance to win the 59th Australian Sprintcar Championship at Archerfield Speedway on Sunday night (May 1). Starting the 40-lap championship finale from row five, Dumesny was both patient and precise in his charge to the front and, as his rivals unravelled in the pressure of the occasion, he pounced to snatch the lead with three laps remaining. Defending champion Jamie Veal finished in second position, with Tasmania’s Jock Goodyer securing third after looking the likely winner for much of the contest. Ian Madsen annexed fourth ahead of two more Tasmanians in Tate Frost and Jamie Bricknell, the latter having advanced from the back row after transferring from the B Main. In a race of high attrition, Daniel Pestka, Nicholas Whell and Brock Hallett were the only other finishers in what will be the final ever staging of this event at Archerfield. Having won the Preliminary Feature race 24 hours earlier, Luke Oldfield suffered a significant setback in his final heat when he crashed hard in turn one, only to bounce back brilliantly to find himself in a podium position before a flat tyre ultimately ended his run.

Despite a format that was far from egalitarian in either design or execution, Brent Kratzmann and Andrew Baumber were the only two drivers who didn’t return for night two of competition, with opening night results putting Lachlan McHugh atop the championship standings. Oldfield sat four points adrift and ahead of Veal by the same margin, with Goodyer, Madsen and Aaron Kelly next in line.

After a lean opening night, Matt Egel enjoyed some good fortune when he found himself elevated into the inversion, and a pole position start in heat one, as a result of Kratzmann’s withdrawal. Taking maximum advantage, Egel led home a South Australian trifecta with Pestka and Steven Lines filling the minor placings. Adrian Redpath exited the championship early when he slammed the turn four wall on lap five.

Simply needing a solid result to secure a spot on the feature race front row, Oldfield had only made it far as turn one in heat ten when he rode a wheel and somersaulted to a halt atop the concrete. From the ensuing restart, Jordyn Brazier jumped clear at the green and would remain at the helm for the duration. A fast finish from Matthew Dumesny enabled him to run down Taylor Prosser and advance to second spot on the penultimate lap.

In leading home Veal and Peter Doukas in heat eleven, young Frost would become the only driver to score heat wins on both nights, a result that would propel him into the top ten.

Robbie Farr was untroubled in winning the final heat of the weekend from the outside front row, despite a couple of restarts, the second of which came as a result of Trent Vardy tipping over in turn two. Goodyer slipped ahead of Richard Morgan with four laps remaining to secure second spot.

On a mission to salvage something from what had been a very frustrating weekend, Jy Corbet started the C Main brilliantly to have advanced from eighth into the top four after just one lap. However, despite having a transfer into the B Main in his keeping, he continued to run the ragged edge and would find himself upside down in turn two on the very next lap. Chris McInerney held firm at the front of the field to lead home Brenton Farrar, Will Carroll, Mitch Gowland, all of whom progressed to the big show.

Somewhat surprisingly perhaps, the B Main proved devoid of any major incidents, with the only interruption coming courtesy of a spin in turn two from Will Carroll. At the completion of 15 laps, Farr, Egel and Prosser filled the top three and it was Bricknell who grabbed the final transfer berth at the expense of Luke Stirton.

With all the preliminaries done, the field for the championship final was settled and McHugh and Veal would share the front row, with Goodyer and Madsen from row two ahead of Matthew Dumesny and Aaron Kelly. Much to the vocal delight of the huge crowd in attendance, Oldfield had repaired the Q17 and would launch from position seven alongside Lines. Frost and Marcus Dumesny would launch from row five, followed by Pestka, Brock Hallett, Brazier, Nicolas Whell, Jessie Attard, Dave Fanning and the four B Main transferees in Farr, Egel, Prosser and Bricknell.

The race got away without incident as McHugh led the pack through the opening lap, with Oldfield and Kelly starting strongly, although the latter would lose a couple spots when he ran too wide through turns one and two on lap two, prior to a spin and subsequent retirement from Fanning that triggered the first restart. With McHugh, Veal, Goodyer, Madsen, Oldfield and Kelly still heading the parade, lapped traffic came into play for the first time on lap eight and, whilst Veal was able to close the gap on the leader, he had no answer when Goodyer moved ahead on lap 12. A broken shock sent Lines to the infield on lap 13 and then, a lap later, the race was halted to accommodate Prosser in his bid to exit the track with a flat tyre. With Marcus Dumesny now sitting fifth, McHugh led away again ahead of Goodyer, Veal and Oldfield, although proceedings were interrupted again almost immediately when Brazier and Whell parked in turn two. Back underway again and McHugh continued to lead Goodyer, Veal, Oldfield and Marcus Dumesny. A slide-job gone awry in turn two resulted in a tangle between Egel and Farr in turn two on lap 25 that left Egel upended and out of action, to be joined on the infield soon after by Oldfield, whose exit with a flat right rear tyre was a cruel blow. With 11 laps to run, Goodyer made his move and slid under McHugh through turn one to assume the lead, only to surrender the position soon after. With both McHugh and Goodyer becoming increasingly untidy, Dumesny was looking perfectly poised by comparison and he zoomed into the lead with three laps remaining. When McHugh climbed the turn two wall and crashed out on lap 38, strange scenes played out on the main straight when Kelly found himself somersaulting onto the infield after the red light had been instigated. At the same time, Matthew Dumesny saw a top-five finish slip from his grasp upon determining that the absence of a right rear wheel might prove somewhat problematic. Back underway for the final dash to the flag and Marcus Dumesny was faultless as he charged to the chequer to add his name to the same Australian Sprintcar Championship trophy that has been won twice previously by his father Max. Solid in his championship defence, Veal secured second spot ahead of Goodyer, with Madsen finishing fourth. In what is perhaps the best ever collective result for Tasmanian drivers, Frost and Bricknell were next in line, with Pestka, Whell and Hallett the only others to go the distance.

The Wingless Sprint feature race saw Ben Manson home first ahead of Jacob Jolley, Liam Atkinson, Jamie Usher and Casey O’Connell. Heat winners were Manson (2), O’Connell, Jayden O’Toole and Robert Mazzer, who led the field away and through an initial restart that resulted when Stuart Jeffries found himself upside down on the main straight. However, when Mazzer became embroiled in a turn two incident on lap two and was banished to the back of the pack for the restart, Manson inherited the top spot and fended off the persistent Jolley to secure the win. Behind Atkinson, Usher and O’Connell came Andrew Robinson, Chris Catchpole and Mikaela Blyton, with Mazzer making it as far forward as ninth. Lance Dawson completed the top ten in advance of Anthony Joyce, Gary Hall and the final finisher in Ben Jennings.

While Terry Leerentveld seemed quite content to allow Sam Gollschewsky and Sean Rose to share the spoils in the Modlite heats with a win apiece, the feature race was a different story altogether as Leerentveld led throughout to notch yet another victory. Gollschewsky finished second ahead Luke Harrison, with Rose and Anthony Stewart rounding out the first five.

Racing continues this weekend (Saturday, May 7) at Archerfield Speedway with round 14 of the East Coast Logistics Sprintcar Track Championship AND the Super Sedan GP53, along with Development Sprintcars, Formula 500s and Compact Speedcars.