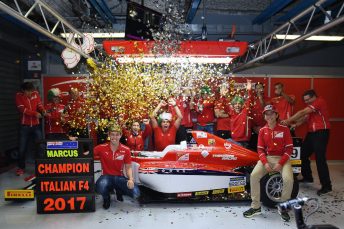 The 17-year-old Kiwi driver, who is contesting his first full season in open-wheel racing and was inducted into the elite Ferrari Driver Academy late last year, took the championship with second place in the opening race of the Monza season finale at the weekend.

“It’s the best feeling in the world. Amazing. I have to thank Ferrari and my team for giving me the chance to bring this home, it’s been incredible,” he said after that first race.

Having qualified on pole, Armstrong was under pressure from a charging Artem Petrov from the start of race one. He conceded the lead after five laps, focused instead on maintaining his championship hopes.

It was never going to be easy: he then found finding himself in a melee for second place after a safety car period bunched up the field. Armstrong was passed several times but fought back in the kind of disciplined and aggressive drive he is becoming known for.

Second place at the flag – one ahead of his main title rival Job van Uitert – was enough to secure the title.

“To be honest, until I crossed the line I wasn’t sure I’d done enough. The team came through to me afterward with the news. Before the race they literally said nothing – I crossed the line and they said that I won. Perfect, I’ll take that.”

Armstrong has thus become the fourth drivers’ champion in the Italian F4 category’s history, and the third driver to win the title with Prema; the second Ferrari junior to claim the trophy and the second graduate of New Zealand’s Toyota Racing Series to do so.

Armstrong says plans for the coming 2018 season are now being drawn together. Like many drivers, he is watching proposed changes to Formula 3 and GP3 categories closely.