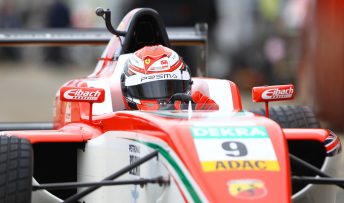 It’s going to be a final showdown for Prema drivers Marcus Armstrong and Jüri Vips in the closing round of the 2017 ADAC German Formula 4 championship this weekend at Hockenheim. Lining-up 1-2 in the drivers’ standings, the two talented racers are set to cross swords for the title one last time in a highly-anticipated finale.

Having secured the team championship with three races still to go, Prema will now rely on its two-strong line-up to keep celebrating. Armstrong will headline the field going to Hockenheim. Supported by the Ferrari Driver Academy, the 17-year-old New Zealander has a 1.5 point advantage over the Estonian and is coming from a positive weekend with two podium finishes at Sachsenring.

On the other hand, Vips has secured two wins six podium finishes this season, more than enough to place him as an equal threat for the championship. Prema will do their 100 percent to support both drivers and finally prevail in the German series’ standings.

“We are lining-up at Hockenheim in a great position. We just won the 2017 team championship and we have two of our drivers first and second in standings. That said, the deal is not sealed yet and the competition is set to be fierce so we can’t afford to lose concentration. So far, both Jüri and Marcus proved quick and consistent so we think we are ready and well-prepared for the most important and anticipated race of their season.”