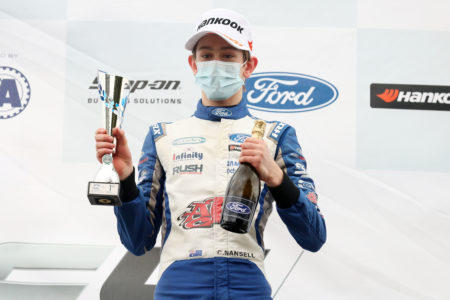 Christian Mansell put himself to within touching distance of the F4 British Championship certified by FIA – powered by Ford EcoBoost Rookie Cup title this past weekend (October 24/25) after producing a stellar class-winning performance at Snetterton.

On what proved to be a pulsating penultimate event of the campaign at the Norfolk venue, the Carlin driver extended his advantage at the summit of the standings for first year drivers with a pair of class wins, whilst also clinching a second overall podium of the season.

The 15-year-old Australian kicked off his weekend in fine style as he powered his single-seater machine to a best qualifying performance of the season. Remaining a constant threat towards the top of the times throughout the session, Mansell stormed to fourth on the grid.

Launching off the second row of the grid for the first of three 20-minute encounters, Mansell initially dropped a spot on the opening tour but fought back up to fourth almost immediately and that would be where he would stay for the remainder of the race.

Starting fourth once again for race two, the AJM Transport, Castrol and Vawdrey Trailers backed driver clinched his second rookie win of the day. Bogging down off the start, Mansell initially dropped down the order in the early stages but soon began to fight back.

In a race-long scrap with his Rookie Cup rivals, the New South Wales-born teenager edged out the chasing pack to cross the line eighth overall, crucially finishing first in the rookie category once again.

Race three – broadcast live on ITV4 on Sunday – saw Mansell add to his silverware collection with another strong performance.

Starting ninth, the one-time race winner duked it out with a host of drivers towards the back of the top ten however a lack of pace ultimately saw him finish where he had started; also securing second place in the Rookie Cup.

Leaving Snetterton, Mansell will carry a 44-point advantage into next month’s season finale whilst also remaining eighth in the overall Drivers’ Championship.

Christian Mansell: “On the whole it has been a fantastic weekend! To come away with two wins and a second in the Rookie Cup, as well as a second overall podium of the season, is just amazing.

“After practice I was feeling confident that we could be in the mix and we managed to take the pace we had into qualifying. Race one was great, I really enjoyed it and to come away with third place was a great reward for everyone.

“I had a bit of a naff start in race two but we did enough to battle back and get the Rookie Cup win. Race three though wasn’t ideal as we just didn’t have the pace to move forward but, every point is crucial and we brought it home to cap off a strong performance.

“Going to Brands Hatch the Rookie Cup title is within reach now but we can’t be complacent. I’ll go into the weekend with the same attitude I have had all season and if I do the job that has been done all season, we will be able to secure the championship – I can’t wait to get there!”

The F4 British Championship certified by FIA – powered by Ford EcoBoost will bring the curtain down on its 2020 season on November 14/15 around the Indy layout of Brands Hatch.