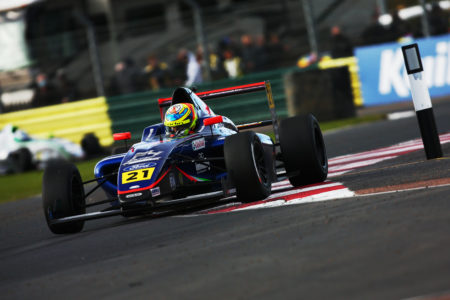 Christian Mansell produced a battling performance in the F4 British Championship certified by FIA – powered by Ford EcoBoost at Croft this past weekend (October 10/11), claiming an impressive victory in the Rookie Cup to maintain his lead at the top of the standings.

Entering the seventh weekend of the season as the driver to beat in the category for ‘first year’ drivers, the Carlin ace showed his fighting spirit as he dug deep to add to his ever-growing silverware collection in the single-seater series.

Getting to grips with the challenging North Yorkshire venue across Friday’s two practice sessions, the 15-year-old showed plenty of speed in what proved to be an ultra-competitive qualifying outing the next day.

With little over half a second covering the top ten around the 2.13-mile circuit, Mansell started the opening encounter of the weekend from ninth.

Heavy rainfall a few hours prior left all drivers with difficult track conditions to tackle and Mansell flourished in the early stages as he powered his way from the fifth row of the grid up into seventh.

Sadly the Australian’s momentum diminished as the 20-minute encounter unfolded and he ultimately crossed the line in tenth. Crucially, Mansell did finish third of the rookie contingent to bank vital points.

On the move as soon as the lights went out, the former karting ace slotted into sixth and settled into a groove, remaining in the position for the remainder of the race.

Leaving Croft, Mansell holds a 43-point advantage at the summit of the Rookie Cup whilst also sitting eighth in the overall Drivers’ Championship.

Christian Mansell: “It has been a mixed weekend but crucially we have been able to maintain the lead in the Rookie Cup; as we reach the business end of the season that is pivotal and the main objective.

“Despite qualifying back in ninth I was quite happy with how the session went, we were on the pace and that is evident in the times. Race one was a little frustrating as I made a good start but the momentum just went away and we dropped down the order late on.

“Race two was much better, the car felt great and I was able to push my way forward, winning the rookie class. On the whole it has been a weekend of highs and lows, what’s important now is that we look at bouncing back to the form we know we possess at Snetterton.”

Snetterton will play host to the penultimate event of the F4 British Championship certified by FIA – powered by Ford EcoBoost season on October 24/25, with three contests scheduled to play out around the Norfolk venue.