Mann too fast in finale but Oldfield is champ

Mann too fast in finale but Oldfield is champ 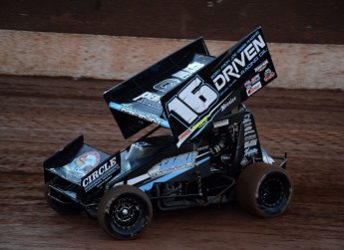 Amidst all of the action, drama and heartache you would expect with so much on the line, it was Bryan Mann who emerged triumphant in the final round of the East Coast Logistics Sprintcar Track Championship at Ausdeck Patios Archerfield Speedway on Saturday night (May 27). In a race that saw all three championship contenders strike trouble, Mann raced from the outside front row to ultimately finish ahead of David Murcott and Brent Kratzmann in a thrilling race that served as a fitting finale for what has been another spectacular season. In a stunning run through the field after transferring from the B Main, Mick Sauer surged into fourth ahead of Callum Walker, David Whell and Luke Oldfield, who emerged as the new track champion despite throwing away the race lead with a mistake on lap 20.

The final round of the Polar Ice Midget Track Championship saw New Zealand’s Chris Gwilliam finish the season with success, leading from flag to flag in an uninterrupted 20-lap Jim Holden Memorial feature race. Darren Vine chased throughout to fill second spot ahead of Troy Ware, who had dropped as low as seventh at one stage before climbing back to third. Scott Farmer finished fourth, followed by Brock Dean, Robbie Stewart and Rusty Whittaker.

A 28-car field hit the track for Sprintcar qualifying and it was Andrew Scheurele who, having started the meeting just 11 points behind Oldfield in the battle for the championship, hit the track as the last car to run against the clock and emerged with KRE Fast Time at 11.659, a mere .004 quicker than Adam Clarke. Walker was next quickest from Peter Lack and Mann, with Brent Aprile, Oldfield, Murcott, young Karl Hoffmans and Andrew Liebke rounding out the top ten.

The opening heat brought championship protagonists Oldfield and Scheuerle together and it was Oldfield who surged from position six to take the win ahead of his season-long adversary. Brett Minett led the early going and eventually finished third.

Heat two saw Sauer keep Clarke and Murcott at bay to score a win before Kratzmann bounded home ahead of Whell and Lack to take heat three.

It was North Queensland’s Brent Aprile who took out the final heat race for the season, leading Nelson Reddacliff and Walker to the chequer. In the only incident of the heats, Mitch Gowland rolled in turn four on lap three, but he would make it back on track for the B Main.

The bronze round of the Lucas Oils Pole Shootout eliminated Walker and Kratzmann, with Murcott and Oldfield ending their run in the silver stage, leaving Clarke to down Mann, Scheurele and Lack in the Gold Dash and secure pole position for the main event.

The B Main fell in favour of Sauer over Andrew Corbet and Rob Hamilton, with Kristy Bonsey moving ahead of Lambert to snare the final transfer spot into the feature race.

Mann pounced at the drop of the green in the 30-lap Crispy Memorial feature race, pacing Lack and polesitter Clarke through the opening two laps before Hamilton climbed the wall in turn four on lap three to trigger a restart, which saw Mann again lead the field. Scheurele’s championship challenge came to an unceremonious end when he slammed the turn four wall on lap 14, effectively handing the title to Oldfield who, despite just needing to finish to be assured of championship success, was hell bent of securing his 11th feature win for the season. Sure enough, Oldfield surged into the lead on lap 17 when Mann faltered exiting turn four, but it was just three laps later that Oldfield struck trouble in the same spot, spinning to a halt but avoiding any contact with the concrete to enable a restart from the rear. Mann went back to the front for the final restart and duly led through the final 10 laps. Sitting third in the championship standings and possessing a genuine chance of winning the series with double points on offer, Lack endured late-race misfortune for the second time in as many rounds when a flat tyre ended his race on lap 23 whilst running in second spot. Lack’s demise elevated Murcott into second spot and promoted Kratzmann onto the podium. The barnstorming Sauer was next in front of Walker and Whell, with Oldfield climbing back to seventh ahead of Liebke, Brad Ayers, Kristy Bonsey and the final finisher in Kevin Britten.

It has been a stellar season for Oldfield with 10 feature race wins, including a WSS victory and, even with the championship on the line, he refused to step back from the hard charging style that has made him such a popular figure with local fans. Whilst the final round didn’t bring the result he would have liked, his effort to win the championship despite missing a round is a remarkable achievement, particularly given the gallant efforts of Scheurele in his championship defence. Both drivers were quick every time they hit the track and there was nobody who demonstrated the wherewithal to match their pace with any consistency.

Brad Harrison bolted at the start of heat three and that was enough to see him home in first place, leading Jamie Hall and Reid Mackay to the flag.

After crashing out of his opening heat with a rollover in the main straight, Ware bounced back brilliantly to take out the final heat from Mark George and Vine.

In a performance that was a far cry from the misfortunes that have befallen him over the course of several weeks, Gwilliam was untroubled in the feature race and had stretched his lead to more than four seconds when the chequer appeared. Vine was similarly untroubled in second spot throughout, while Ware advanced from fifth to take third ahead of Farmer, Dean, Stewart and Whittaker, who was aboard Harrisons #28 after his own mount expired in his final heat. Michael Harders was next in line, with Wingless Sprint regular Glenn Wright making a good fist of his cameo in the Brendan Palmer #41 to nab ninth from Doyle. Mackay, Hall, Charlie Brown, Rodney Harders, Corey Stothard and Tony Eickenloff were the final finishers.

In light of his two heat race wins, James Kennedy would start the KRE Race Engines Formula 500 feature race from pole position beside series leader Liam Williams who, along with Ryan Skennar, also picked up a heat win. Unfortunately, despite gathering their biggest field of the season, the feature race descended into a series of incidents and interruptions as more than half the field exited within the first five laps. Ryan McNamara, Garry Edwards, Jayden Peacock, Piper Ogilvie, Randy Morgan and Ryan Skennar all found themselves upside down in separate incidents that resulted in the race being shortened to 15 laps. In between interruptions, there was good racing at the front of the field with Kennedy, Williams and Skennar running three-wide for consecutive laps. When the race finally settled into a rhythm, just eight of the 21 starters remained and Kennedy kept possession of the lead despite a late surge from Williams, whose runner-up result was enough to clinch the championship.

Modlite heat wins went to Terry Leerentveld (2), Aaron Prosser and Klinton Hancey and this was how they finished in the feature event as Queensland champ Leerentveld took the race and the Tri-City Series. Prosser closed to within less than half a second by races end, while Hancey saw off the best efforts of Brad Dawson to secure third after a miraculous save on the opening lap when he seemed certain to roll in turn two. Will Butler finished fifth ahead of Sean Rose, who recovered from a heat race rollover to surge from position 13. Steve Collins, Jake McRae, Dylan Hunter and Nathan Politch rounded out the top ten.

The first meeting of the 2017/2018 Archerfield season will be on September 16 featuring Sprintcars, Midgets, Formula 500s, Compact Speedcars, Monster Trucks and Fireworks.