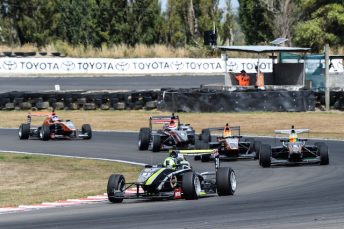 MEDIA RELEASE: Confirmation two international rising stars who were crowd-pleasing protagonists of the 2016 New Zealand Grand Prix will return to Manfeild has delighted the venue.

“The weekend of the 2016 NZGP was especially thrilling because, going into that final crucial round, Pedro was the only driver who had a chance of toppling Lando off the top of the points table,” Manfeild chief executive Julie Keane said.

“Castrol TRS has always provided close racing and yet there was a real intensity about the whole weekend.”

Unfortunately, Piquet had his worst weekend of the five-round, 15-race series and dropped from second to fifth in the final standings, while Norris went on to secure the title and the top prize of New Zealand motorsport.

Both drivers have since gone on to other championships – Piquet to the FIA European Formula 3 Championship, Norris to the European and Northern European Formula Renault series – but have determined that another summer in New Zealand will be just the ticket to sharpen up for further ambitions.

Mrs Keane says it’s a great reflection of the international status of TRS and the NZGP that the pair, and a host of other international talent announced so far, are coming back to New Zealand.

“Clearly, the whole concept of a quick-fire, five weekend title fight in a top- class car on some very well-regarded circuits holds a lot of allure to these up-and-coming young guns,” she said.

“We know that the drivers have fond regard for Manfeild and, of course, next year’s race weekend will be of great significance for being a celebration of Chris Amon, whose status in national and international motorsport and association with TRS is truly special.”

While Piquet had an off weekend in last season’s finale, he’d looked good overall: He’d won two races and had also scored five other podiums in the first four rounds. Norris, meantime, had won six races and finished on the podium another five times.

Also returning for more is Indian driver Jehan Daruvala, who finished runner- up in the 2016 championship to Norris last summer then headed off to Europe for a season of racing in Formula Renault.

TRS has also been a spring board for Kiwi talent, with Palmerston North’s Brendon Hartley and Wanganui’s Earl Bamber – now team-mates in the Porsche world endurance championship – having come through the ranks, along with other internationals Mitch Evans, Shane Van Gisbergen, Richie Stanaway and Nick Cassidy.

Also confirmed for the 2017 meeting, a round of the Speedworks-promoted premier racing series, are ENZED Muscle Cars, the V8 race series that began at Manfeild more than a decade ago, and TradeZone GTRNZ, another high-performance category featuring equally fiery futuristic fare.

“Having Central Muscle Cars on our programme is another huge rev-up for the premier national championship race meeting and is especially fitting given its close ties to our facility,” Mrs Keane said.

A series that celebrates the special breed of American and Australian production vehicles that were on sale between 1958 and 1978, and represented the finest examples of their marque, started out in 2003 after a group of enthusiasts got together to race at Manfeild.

“The antics of these high-powered classics at that very first meetings sparked an enthusiastic following that has seen the series go from strength to strength since.

“A great appeal of Central Muscle Cars is that age has simply not wearied these machines – or the drivers’ desire to be first over the line. This is not demonstration driving, it’s full-out racing and it produces an incredible spectacle: Mustangs and Falcons versus Camaros, Chargers, Monaros and Toranas.

“Some of these cars have NASCAR engines and are running huge horsepower,” she said.

The TradeZone GTRNZ category, meantime, is virtually a video car racing came brought to hard metal reality – amazing exotics machines in a series with no limits on horsepower and speed. From Crawford prototypes to Supertourers, turbocharged four-wheel- drives and … well, the sky seems the limit. Again, Manfeild has been central to the development of this category, Mrs Keane notes.

“Some of the fastest and most amazing GT cars are racing here regularly and their drivers are well-known to our fans. This will be another show like no other.”

GTRNZ splits into GT1, GT2, GT3 and GT4 sub-classes, with the first category running with the second and third with the fourth.