Manfeild resurface on the pace

Manfeild resurface on the pace 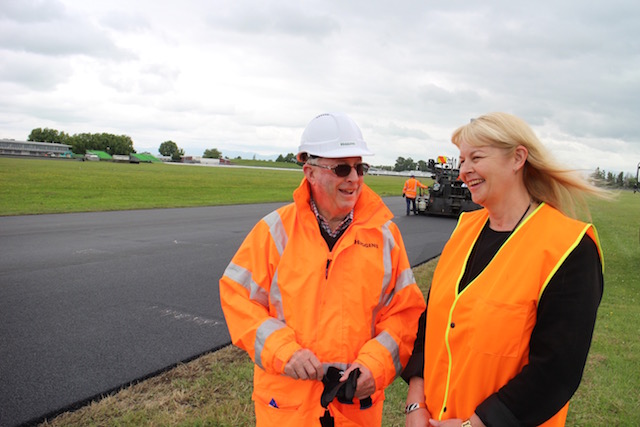 MEDIA RELEASE: A progressive circuit resurface spanning eight years and wrapping up with an almost half million dollar finale has provided an immediate record-breaking result for Manfeild.

Resurfacing over the past fortnight of the centre and back straights of the 3km main circuit by civil construction company Higgins, the company that built the original Feilding motor-racing track in 1973, was completed just in time for a big motorcycling race meeting, the December 12-13 Suzuki Tri-Series, where long-standing Production Superbike and Sidecar lap records were bettered by international visitors.

Manfeild Park chief executive Julie Keane is certain the new surface made all the difference.

“The circuit is just so much smoother and has optimum grip so as it now stands it is faster, not just in the areas where competitors lay down full power but also through the corners,” she commented.

“We had imagined that the bike meeting would show the positive difference with improvements in times, but to see one lap record reset by three seconds is even better than we had imagined.

“That feat alone shows that our track is looking really good for our next big meeting, the New Zealand Grand Prix on February 13-14, especially for the Toyota Racing Series that is chasing the ultimate prize of domestic national motor-racing.

“I would not be surprised if TRS also resets their lap record as well.”

The Suzuki Tri-Series is the biggest and richest international motorcycle competition run in New Zealand. Manfeild hosted the second round, with the finale on Wanganui’s Cemetery Circuit on Boxing Day.

The biggest change came in sidecars with a multiple world champion pairing and their title-winning machine.

The lap time of one minute and 8.958 seconds for Britons Tim Reeves – a five-time world sidecar titleholder since 2005 – and Mark Wilkes aboard a LCR F1 rig of formidable international standing, reset the class record established in 2010 by almost three seconds and cemented their dominance over the weekend.

The breakthrough superbike time of one minute and 5:152 seconds clocked by Horst Saiger also shaved around 200th of a second off a class record set by Andrew Stroud back in 2008.

Saiger of Liechenstein was onboard a Kawasaki ZX-10R to defend the Formula One Superbike title he won in New Zealand last summer.

Mrs Keane says the resurfacing project has revitalised a circuit of great national and international standing and leaves it in fantastic shape for at least the next 20 years.

The last part of the project began on November 30 and was completed on December 10 and ran exactly to plan.

In addition to addressing key track sections of 244 metres and 428 metres’ length respectively, the work also allowed a full resurfacing of the pit lane covering more than 4000 metres.

“The longest resurfacing, addressing the back straight, was the first since the track was laid in 1973 and though the surface had held up well, it has become all the better from this latest attention,” Mrs Keane said.

Some 1040 tonnes of asphalt were laid; 800 tonnes onto the track and the remainder in pit lane, with everything being brought in by trucks, each capable of carrying up to 10 tonnes per trip.

The asphalt was a special formulation designed by Higgins to stand up well to aggressive acceleration and braking and also enhance water dispersal.

“My father Dan Higgins was involved in the design and construction of the track in 1973 and ever since Higgins has had a close association with Manfeild,” Higgins Group chairman and co-founder Sir Patrick Higgins said.

“Congratulations to Manfeild on the completion of this project. It will provide a very durable, long life surface for the various competitive events in its calendar.”