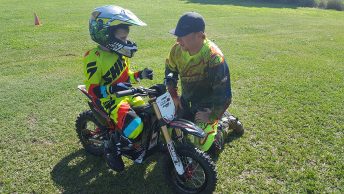 Each day, six families around Australia receive the devastating news that their child has a serious illness. That’s 2,000 really sick kids and teens who could benefit from the healing power of a Make-A-Wish wish.

Last Sunday, one little boy who has been battling a life-threatening illness received a long-awaited wish; his very own motorbike, thanks to Make-A-Wish Australia.

Phinneus, affectionately called Phinni, developed his love of motorbikes studying YouTube videos until he picked out the exact one he wanted. He would go for rides on the back of his uncle’s bike with his dad on their large property and wait for the day he could ride the bike of his dreams.

In the months leading up to his wish presentation, knowing his wish was going to come true gave Phinni the strength to battle the challenges of his illness, and something wonderful to look forward to.

As part of Phinni’s wish journey, the children’s charity arranged for him to visit his local motorcycle store where they kitted him out with all the safety gear and equipment he would need. His mum, Sarah said after they arrived home Phinni was so excited about his new gear he wouldn’t take his helmet off.

When the day of his wish presentation at Brisbane North Junior Motorcycle Club arrived, Phinni was jumping out of his skin with excitement. He was presented with his bike by Peter Goddard from OSET and Australian three-time Speedway World Champion, World Cup winner and former World Under-21 Champion, Jason Crump and volunteers from the local Make-A-Wish branch. Phinni was over the moon with his new electric bike and before long he was off and riding. Both Peter & Jason couldn’t believe how quickly he picked up riding and his balance was amazing for such a young boy. What a natural!

“It was really special to see the look on Phinni’s face when we presented him with his new bike…priceless.

Once the basics of riding were explained to him, he found his balance and adapted very quickly, and like all kids he didn’t want to get off.

The best part for me was the photo of Phinni asleep in the car, 5 minutes into the ride home after a day on his bike !!”

Phinni and his family had a big impact on the motorcycling community and Pete Goddard was more than instrumental in making Phinni’s wish a reality.

“When Make-A-Wish Australia contacted us regarding young Phinni’s wish to have his very own OSET MX10 Electric Bike I thought what a fantastic wish as my entire life has been motorcycles, so we must make this special for him!

With the fantastic support of Motorcycling QLD, a combined Make-A-Wish Presentation and Coaching day was kindly organised through the North Brisbane Junior Motorcycle Club with four times World Speedway Champion Jason Crump as Phinni’s first coach, and to top it off Phinni and his family and friends got to watch Jason and some of the great Dirt Track Racing that day at the Mick Doohan Raceway complex.

Phinni simply couldn’t get his gear on quick enough to get riding, for his first ever ride of a motorbike. His cycling skills showed immediately and he quickly mastered the throttle and brakes under Jason’s guidance, that huge smile in that helmet says it all – what a beautiful wish granted!

Riding all day and earning his first Motorcycling Australia Mini License showed his determination and will for life in full, we basically had to peal him off the bike at the end of the day to pack up – sure there’ll be many more!

We became the OSET Bike importer for exactly that reason; to give kids the best opportunity to learn to ride motorbikes in a safe and friendly way – a fantastic skill and passion they will have for life!

A huge thanks to all the volunteers who helped make this day so special for Phinni!” Pete summarises.

This wish journey would not have been possible without the incredible support of our Wish Force from Motorcycling Queensland, Motorcycling Australia, Jason Crump, Peter Goddard, Make-A-Wish volunteers and the countless other people who were involved in making Phinnis wish journey so incredible.

Make-A-Wish has been granting life-changing wishes in Australia since 1985. Receiving no government funding, they rely on the support of the community to make wishes like Phinni’s come true. For more information or to make a donation, visit makeawish.org.au.