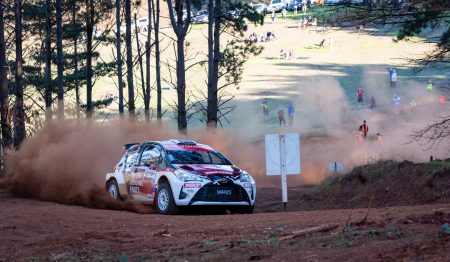 A new look field and changes to the forest stages will create excitement for crews and spectators at the upcoming Make Smoking History Forest Rally to be held in Western Australia from 5 -7 April.

Exciting changes to the CAMS Australian Rally Championship (ARC) introduced over the off-season including; new formats for several events, an increased online presence and most importantly the return of some former ARC heavyweights to the series have set the scene for a huge year in the Championship which officially gets underway in WA at the Make Smoking History Forest Rally.

The recent bush fires which devastated parts of the state forest and pine plantations around Nannup caused last minute stage changes for organisers, with two planned new stages having to be abandoned and a new stage created.

Despite the setbacks Make Smoking History Forest Rally Clerk of Course John Gibbons said the competitors and spectators could expect a super start to the 2019 season.

“The fires had a huge impact on the local area and for us it meant we had to re-jig our course somewhat and include some previously run stages that we weren’t planning on running in 2019,” Gibbons said.

“The competitive distance will remain almost exactly the same as we had planned and there will still be some roads which haven’t been used by many of the competitors,” he said.

In a major boost to the series, manufacturers Toyota (backing the two car team of Bates brothers Harry and Lewis) and Subaru (again backing 2017 ARC Champion Molly Taylor) have committed to the 2019 ARC season.

Returning to the ARC and joining the solid line-up will be 2011 ARC Champion Justin Dowel and former Ford factory driver Darren Windus – both who will be searching for their first win out West.

Four ARC drivers will contest the West Australian round of the ARC for the first time; Richie Dalton, joined by experienced co-driver Dale Moscatt, JJ Hatton and co-driver Nathan Long, Luke Anear will set next to Steve Glenney while Kevin Raedel will be joined by Adam Brandford.

Raedel will also be battling it out against 2018 Make Smoking History Forest Rally 2WD event winner Haowen Chu in the 2WD class of the ARC.

Two West Australian crews, Tom Wilde/Madeline Kirkhouse and John O’Dowd/Toni Feaver will hope their local knowledge and experience on the state’s unique ball-bearing surface will give them the edge over the interstate crews in the ARC.

O’Dowd will be the only driver steering a Skoda Fabia R5 in the ARC field and will be hoping to repeat the winning performance of Eli Evans/Ben Searcy who won not only the Make Smoking History Forest Rally, but also the 2018 ARC title behind the wheel of a Skoda in 2018.

The Make Smoking History Forest Rally roars to life on Friday evening with the electric Trade Hire Busselton Super Special Stage held under lights around the Busselton Foreshore with the free event a highlight for locals and holiday makers.

The action then heads to the red gravel roads around Nannup where 48 crews, from across Australia and Western Australia will battle it out for the chance to take the opening points of the new season in the ARC, CAMS Zestino Tyres WA Rally Championship (WARC), Clubman Masters and Clubman Cup classes.

The local fields will be led by drivers such as Stephen Oxley and Kody Reynolds with Kelly Thomas, who won the WARC Rookie Co-driver in last year’s event, contesting her first event as a driver another one to watch out in the forest.