Major holds off competition to claim back to back wins

Major holds off competition to claim back to back wins 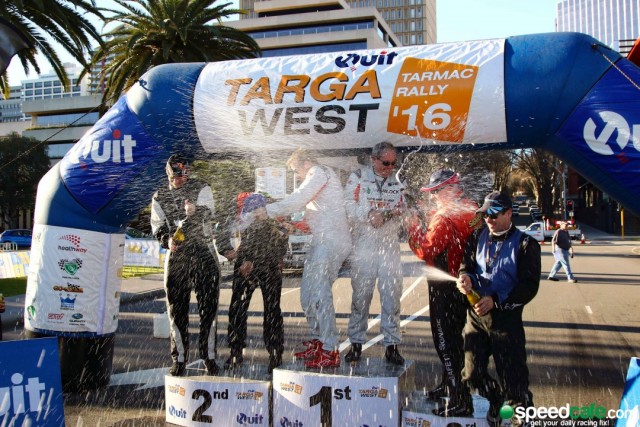 MEDIA RELEASE: Thousands of motorsport fans lined Riverside Drive to cheer on Quit Targa West competitors as they crossed the finish line on the final stage of the four day tarmac rally.

Competitors started their final day on Sunday by tackling the 9 kilometre Malaga Shamrock Stage three times, before moving into the city to complete the 2.2 kilometre Targa City Sprint Stage. The city stage began with a superkhana-style course that commanded precision driving, before testing the full extent of their power along the long straight of Riverside Drive.

There was back to back wins on the line for both Peter Major in Modern Competition category and Sharon Gunson in Modern Challenge category. There were also first time competitors who found themselves with the possibility of a podium place just within their grasp. 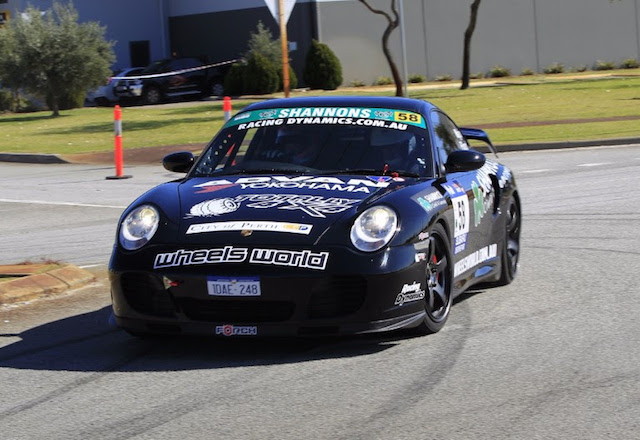 Peter Major and Greg Flood on a mission in Malaga to secure the podium. pic: Travis Barnes

“For a car that was built in seven weeks and then driven for the first time in an event untested, this is an amazing result,” said Major. “I can’t thank the guys at Racing Dynamics enough, they’ve put a lot of hours into it. Once we tune and tweak it a little bit, it’s going to be a weapon of a rally car.”

“I love this event. Any time you can do a rally in your home town is great – all your friends and family are able to come and support you, plus it is such a great setting here in the city to finish the event. We enjoy it, and we’ve got good backing here in Perth with Shamrock and Wheels World.”

Will White and Matt Thompson (Mitsubishi Evo 9) had Major and Flood in their sights, but the hope of any slip up from their competition didn’t eventuate and the 46 second gap couldn’t be closed.

“We had a go today,” said White. “Peter obviously knew we were going too, so he went quite hard as well. He did a great job of holding us off.

“We had a blast and it’s great to be here. We’ll try and have another go next year, you never know what can happen.”

White and Thompson were the new additions to this year’s podium with Stewart Liddle claiming back to back third place. Liddle and his new co-driver Michael Lloyd crossed the finish line in the Mitsubishi Evo 10 1 minute and 26 seconds behind the leaders.

There was a sigh of relief from John O’Dowd after he pulled the Lamborghini Gallardo Superleggra safely into the service park for the last time.

“I can put my cheque book away now,” joked O’Dowd, who had the vehicle loaned to him by its Targa Tasmanian winning owners.

“The car was fantastic and it ran really well all weekend. It was just a matter of me getting used to it, I wish we had another three days now! If I receive an offer to do it again, I certainly would consider it.”

O’Dowd and co-driver Ben Searcy crossed the finish line in 15th position. The car will be transported back across the Nullarbor early next week. 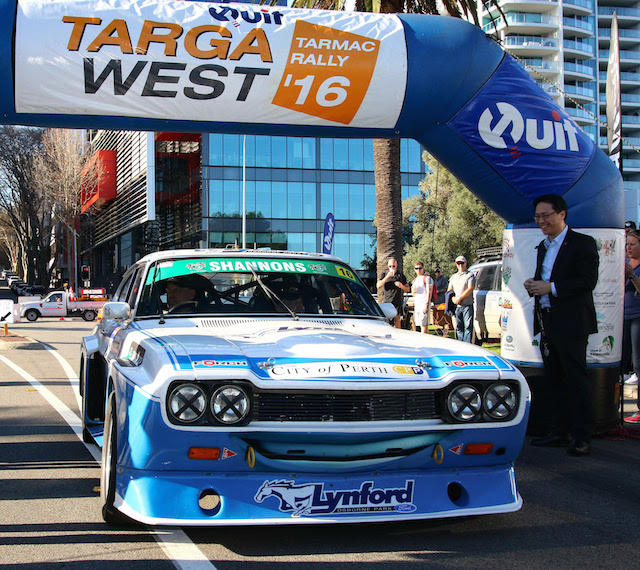 It all went right for Simon Gunson and Murray Armenti. pic: Tim Allott

Simon Gunson, Murray Armenti and their Ford Capri Perana stayed a formidable force for the entire event. The team finished with a time of 1:59.43, a result that saw Gunson take his second Quit Targa West win and share the podium with wife Sharon, who also won her category.

“We’ve made it – another one, the second one is even better than the first one,” said Gunson. “This is the first time Sharon and I have both been up on the podium together.

“We’ve had a few manageable issues with the car. Last time we finished first the car was just holding together at the end with battery and alternator issues, but this time it has been very good.

“The car is a bit tired and needs some loving, so we’ll give her a bit of a spruce up after season and we will be back.”

Consistent driving and a reliable car saw Mark Dobson and Nigel Jones in the Triumph TR7 sit in second place from the first Leg to the last. The team finished 2 minutes and 57 seconds behind Gunson and Armenti.

“We’re happy with second,” said Dobson. “We realised we couldn’t quite make Simon’s pace, but we did well and have achieved our fastest ever times. The car has performed faultlessly – only at one service did we put a little bit of oil in it and put on some new tyres.”

Simon Lingford and Avril Curtis rounded out the top three in their Datsun 240Z. The duo crossed the finish line with a 6 minute 28 second gap to the leaders.
Modern Challenge 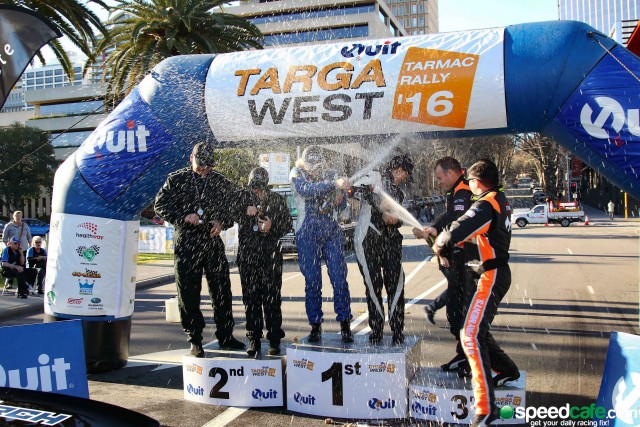 Sharon Gunson and Alexandra Wilde did a fantastic job holding off the competition in the Modern Challenge category. Gunson and Wilde are a new pairing, with Gunson’s previous co-driver Helen Lunsmann co-driving for her husband Jurgen this year.

“The win feels fantastic,” said Gunson. “With a new co-driver and a car that was having a few issues at events prior to Targa, I came into the competition with a little bit of an uneasy feeling. We also didn’t get off to a great start on Thursday, but Alex picked it up fantastically and we improved with every stage.

“We’ll be back next year – we might as well make it a fourth time. Simon and I have been taking turns on the podium in previous years, but to both get on the podium this year – I think that’s a first for Targa to have a husband and wife podium in separate cars!”

After a fantastic third leg Todd Zani and Jon Mortimer in the HSV Clubsport R8 briefly had claimed second place off husband and wife team George and Kerry Watts. The Watts team gave the final stage their all, and their Mitsubishi Evo 10 which had a broken turbo seal held together for them. They finished the day in second with a 12 second gap to the leaders, leaving Zani and Mortimer having to settle for third with a 1 minute 43 second gap. “

“The improvement in ourselves and our driving is so much better this year, and it can only continue,” said Kerry.

“Last year we were over a minute behind and this year we are only 12 seconds, so we’re pretty happy with sub 20. Not bad for a husband and wife team with nobody else other than our neighbours here to support us – we’re pretty happy.”

“We took the competition up to them this time,” said George. “We probably had them looking over their shoulder even though it wasn’t reflected in the times until the dying minute here.

“We came second so we didn’t have to break the car,” joked George who said the previous day ‘that he was willing to drive the car to destruction’. “We’re stoked, and we’re going home with a car that will drive home.” 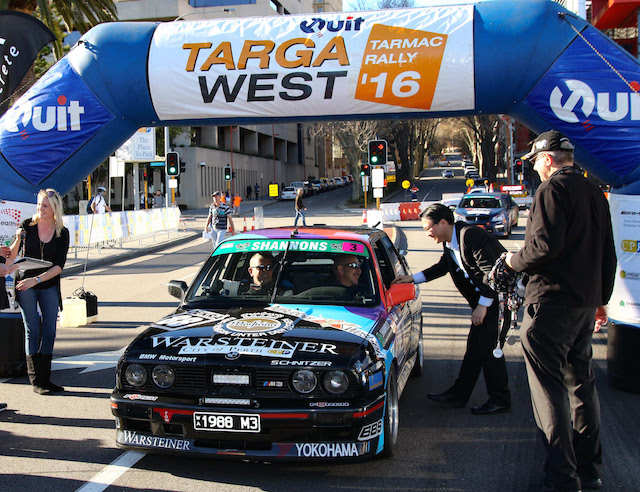 It was first time Quit Targa West entrant Phil Peak and co-driver Sam Hackett who claimed the win in the Classic Challenge category. Peak and Hackett finished the event in the BMW M3 with a very respectable 4 minute 23 second lead over last year’s category winner Paul Thompson and Vanessa Saunderson in the Porsche 911RS.

“I couldn’t have asked for a better result, we worked hard all weekend,” said Peak. “We went into Malaga this morning knowing that Jurgen would be really pushing us, so we just went out there and gave it everything we had.

“It feels fantastic to take the win, especially since we are a family and friends team – we haven’t got the money to put into the car, and we don’t have any spare parts so we try and prepare the car as much as possible beforehand.

“We’ve enjoyed the City of Perth stages, the carpark is a bit tricky but the crowds are here and that’s what it is all about – we’re enjoying giving the crowd some entertainment.”

Category favourites to win, Jurgen and Helen Lunsmann had an event plagued with car issues in their Ford Capri Perana which put the team out of contention. It was Bob Fisher and daughter Louise Paul who took third place in their Triumph TR4a.

There were six Quit Targa West newcomers who entered the Rookie Rallye category this year. The category is a two day event within the main event for first time entrants. This year Keith Bromfield and Ian Bruce took out top honours in their Mercedes AMG GLA45.

“Phenomenal experience,” said Bromfield. “It’s the first time I have ever raced a car and to come out and win our class is ‘wow’ – not something we were expecting.

“A few Rookie mistakes were made along the road, but I guess that is why we’re rookies. It was an absolutely brilliant experience and I’m already planning to do it again.

“The car ran perfectly. These AMG’s are made for performance, the only problem was today we had no grip. I’ve shredded the tyres because I did not know about race tyres, so that will be one thing I’ll be changing for next year.

For a complete listing of results please see www.rallyresults.com.au/targawest/2016.