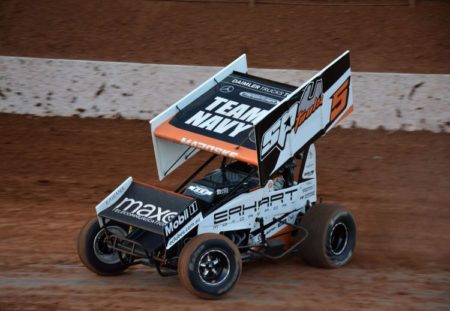 Cody Maroske scored his maiden Sprintcar feature race win in the opening round of the 2020/2021 Archerfield Speedway Track Championship on Saturday night (October 17). For the fifth time in as many feature race starts so far this season, Luke Oldfield finished in second spot, with defending track champ Aaron Kelly clinching third spot ahead of Callum Walker and Kevin Titman in an action-packed 30-lap showdown. Having transferred from the B Main, Andrew Corbet surged through the field to secure sixth, with Brock Dean next best and the last runner on the lead lap, leaving Adam Butler, Kristy Bonsey and Tim Farrell to round out the top ten.

Whilst there was no surprise in seeing Queensland champ Lachlan McHugh emerge atop the timesheets from Sprintcar qualifying with a best lap of 11.518, it was Dylan Menz who sprung a surprise when he stopped the clock at 11.654 to emerge second overall ahead of Oldfield (11.666). Mitchell Gee (11.743) and Darren Jensen (11.796) were next quickest, with Walker, Titman, Corbet, Bonsey and Kelly the best of the rest.

Despite starting from the back of the inversion on the outside of row four, McHugh was unstoppable in the opening heat as he stormed through the field and rounded up Allan Woods on the final lap to grab the win, with Dean finishing third.

Maroske downed Mitch Gowland and Kelly to win heat two before McHugh romped home from the front row in heat three, leading Titman and Woods to the line.

Also gifted a front row start in the final heat, success for Oldfield seemed all but assured, except Kelly had other ideas and followed through to leave Oldfield second at the flag.

Brant Chandler found instant success in his move up from Wingless Sprints, winning the opening heat of the Petzyo Sprintcar Development Series. Jason King led early, only to spin himself down the order before recovering to salvage second with a late pass on Libby Ellis.

Ellis was the early leader in heat two, before she also threw it away with a spin in turn four on lap two. Chandler again took maximum advantage to score a second win, this time ahead of Nicholas O’Keefe and Jeremy Gaudry.

The Sprintcar Dash certainly mixed things up with McHugh selecting grid four in the pre-race draw before finding himself upside down in turn two on the opening lap after contacting Kelly. With Woods and Walker to join McHugh on the infield when they became entangled in the main straight two laps later, Maroske would lead the depleted field for the restart. However, with Oldfield circulating half a second quicker than the others, he swept into the lead to secure pole position for the feature event. Maroske finished second ahead of Titman and Jensen, with a flat tyre curtailing Kelly.

After seeing off an early challenge from Tim Farrell, Corbet looked to have the B Main in his keeping, only to spin himself out of the lead on lap nine and put himself at risk of missing a transfer into the main event. Farrell would inherit the lead and finish more than three seconds clear of young Taylor Prosser, who enjoyed a very impressive championship debut in only his third Sprintcar meeting. Adam Butler finished third ahead of Corbet, who would subsequently advance 14 spots in the feature race.

The feature race only made it as far as turn three before being halted as Woods, Menz and Corbet sat stricken in turn three, only the latter able to make the restart. With Oldfield leading the field away again, the race only proceeded for another two laps until McHugh, who had been in a class of his own through the early weeks of the season but found himself starting on the fourth row as a result of his Dash mishap, saw his hopes of a fifth straight feature race win evaporate when he tipped over again, this time in turn three. With McHugh on the grass, it looked as though Oldfield might finally break his run of runner-up results, leading the restart from Maroske and Jensen, who would unfortunately exit a lap later after contacting the wall. Oldfield continued to pace the field until Maroske pounced on lap 15 to assume control and set forth on a path to victory lane. Kelly made quick progress into third spot, but was unable to make much impression on the lead duo, while a late pass from Walker would advance him to fourth ahead of Titman. A night of mixed fortunes ended well for Corbet with his big run into sixth, a position occupied by Dean until the final lap. Another B Main transferee in Butler was next in line ahead of Bonsey, Farrell, Dave Fanning, Gowland and the only other finisher in Andrew Baumber.

Round two of the Shock Absorber Therapy AMCA Nationals Track Championship served up some quality racing that kicked off with Michael Denning victorious in the opening heat over Steve Potts and Stephen Ward.

Marshall outpaced Hardy and Hitchcock in the final heat and it was this trio, along with Potts, who would occupy the first two rows of the grid for the feature.

Hardy got the best of the start from pole position before Potts powered to the front on lap three. Despite the best efforts of Hardy in taking advantage of the multi-lane track to run the high side in a good scrap, Potts held firm to remain in possession of the lead at the fall of the flag. Marshall, meanwhile, exited on lap nine, leaving Hitchcock to fend off Tomkins, who advanced to third before also heading infield on lap 14, elevating Hitchcock back into a podium position. However, Steve Price had other ideas and, having started at the back of the pack after striking trouble in the heats, he surged into third with just one lap remaining. Behind Hitchcock came Denning, Robert Kynaston and Ward, with Troy Price, Shane Stacey and Dylan Stacey rounding out the top ten.

Only a small field fronted for the opening round of the Done Right Paint Worx Formula 500 Series and, with wins in both heat races, a Liam Williams clean sweep looked on the cards until things got interesting in the feature race during a restart on lap nine. In what was a fairly mundane opening stanza, Williams had established a sizeable lead over James Kennedy when a spin from Libby Ellis on lap seven halted proceedings. With Williams and Kennedy engaging in some tomfoolery as they approached the restart, the two cars locked together momentarily, allowing Kristin Brown to zoom into the lead and set sail to victory lane. Tarhlea Apelt and Dekota Gay also pounced to advance into second and third respectively, positions they would hold to the finish, leaving Williams to finish fourth as Kennedy headed infield. Brock Thornton, Brady Argles, Mitchell Whittaker and Adrian Farrell completed the finishers.

It was a very familiar scenario in the Modlite heat races with Klinton Hancey and Terry Leerentveld snaring two wins apiece, putting both men on row five for the feature due to a top-ten inversion. Whilst Leerentveld headed infield early, Hancey had moved into the lead after four laps and was untroubled from that point and ultimately emerged an easy winner when Kyle Honour, who had narrowed the gap in the latter stages of the race, faltered with only a lap remaining and failed to finish. Dylan Hunter and Chris Crowe would subsequently share the podium, followed home by Sam Gollschewsky and Adam Walker. With Steve Collins, Chris Fing and Callum Beerling all spinning themselves out of contention while running near the front of the field, Adam Bradford and Tyson Snow were able to advance from the back of the bus to fill sixth and seventh, with Dan Lewis, Fing and Beerling completing the top ten runners at the fall of the flag.

Following Compact Speedcar heat race successes for Bernie Clarke, Andrew Parkes and Harry Stewart, it was Bodie Smith who won triumphed when it mattered most, chasing down Andrew Parkes to assume the lead on lap 10 to secure his third feature race win in succession. When Parkes exited on lap 13, Matt O’Neill skipped into second spot, with Stewart, Connor McCullough and Andrew Rooke the best of the rest.

After winning both of the RSA Outlaw Sedan heats, Wayne Kirkman was on track to clean sweep the program until he opted for a spin in the final corner that left him a non-finisher, gifting a win to Dave Sansby ahead of Daniel Taylor.

After winning the opening A Grade Open Sedan heat by 14 seconds and taking the second preliminary by more than six seconds, the Super Sedan-mounted Ben Robertson might have expected to also romp home in the feature. However, confidence is no substitute for execution and, as Robertson struggled in the slickening conditions, Justin Randall powered his humble Torana to a crowd-pleasing win. Robertson finished second ahead of Gary Kivella, Keith Craft and Colin Morris.

In the B Grade ranks, Jamie Love and Mark Anderson collected heat wins and it was the latter who also took out the feature in advance of Hayden Grantz and Steffani Manser.

Stockcars made a rollicking return to Archerfield and, despite the crash and bash action, there was no stopping Stu Jefferies as he triumphed in all three heats and the feature.As the only other finishers in the feature race, Tony Shires and Graham Rangihuna filled the minor placings

The next meeting at Archerfield Speedway is on Saturday, October 31 featuring round two of the Sprintcar Championship and round three of the TFH Midget Series, plus Wingless Sprints, Lightning Sprints, Microsprints and Ford vs Holden vs Sigma sedans.