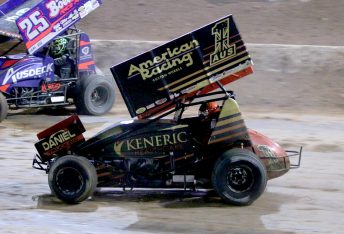 Madsen started from pole position for the 20 lap preliminary feature race after scoring the maximum qualifying points in his first flight of time trials while defending World Series champion James McFadden started out of position two.

The second row featured nine-time World of Outlaws champion, Donny Schatz on the inside with overall Revolution Racegear QuickTime recipient, Carson Macedo on his outside, and Schatz declared his intentions immediately taking the lead on the first rotation.

It was less than two laps however before Madsen regained the lead, and despite Schatz coming within striking distance on multiple occasions, Madsen marched home from flag to flag to claim an authority-stamping win.

Macedo dislodged McFadden at lap nine and was never headed for the last spot on the podium, with McFadden locked in to fourth and Pennsylvanian Logan Schuchart finishing where he started in fifth.

“That was a lot of fun!” Madsen said as he addressed the crowd. “I probably should have gone down to the bottom earlier but it was always going to be a risk when you have Donny on your tail so we were a bit lucky that it just fell our way tonight.”

Night two of the Australian Sprintcar Open begins at 5 PM tonight Queensland time, with the pay-per-view webcast available for purchase from WorldSeriesSprintcars.com